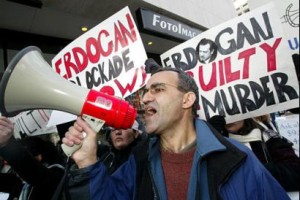 Kani Xulam during a protest in Washington, DC. Image via kurdistan.org

Newly elected Turkish President Recep Tayyip Erdogan gave that old expression new meaning when he “threw a dog bone” during his address to the Council on Foreign Relations in New York last month.

He said the new Islamic State had killed a Turkish dog — well, sort of — as part of the price Turkey paid for the release of 46 Turkish diplomats being held by Islamic State militants.

Mr. Erdogan denied that Turkey paid any ransom. He said, Ankara has “no monetary relationship” with the Islamic State, but quickly added, “You cannot expect us to divulge what the intelligence agencies do in their business.”

Right after that suspicious denial, Mr. Erdogan “threw his dog bone” in this casual aside: “We lost a dog to them.”

For those who follow Mr. Erdogan, it came across as an enticing ploy calculated to curry favor with his audience: Americans love dogs and adopt them as house pets and often treat them like family members.

Muslims — and Mr. Erdogan considers himself a pious one — dislike dogs, consider them dirty, and think those who befriend or adopt them childish.

So that pooch killed by Islamic State militants must have been owned by a secular Turkish diplomat — whose numbers, incidentally, are dwindling as Turkey reorients itself towards Mecca.

Still, the Turkish president couldn’t resist using a “dirty” dog to “clean up” his image and that of his country’s for some hoped-for sympathy from the unsuspecting Americans.

But the shaggy dog story was peanuts — compared to Mr. Erdogan’s outlandish claim that “Turkey has never been a racist state.”

Trying to bolster his claim, “Our country embraced the Jews who were fleeing Hitler’s persecution,” he added with a deadpan expression.

The average New Yorker may not know whether Turkey is racist, or if it truly “welcomed” the persecuted Jews, but that roomful of highly educated Americans knew better — and should have challenged Mr. Erdogan’s blatant lie.

The majority Turkish population dictates to the minority Kurdish population what to do, including prohibiting us from calling ourselves Kurds.

As to his assertion that Turkey welcomed Jews fleeing the Holocaust, nothing in the historical record supports Mr. Erdogan’s far-fetched claim.

The Turkish president is too young to know this, but a ship called Struma gleams brightly as exhibit A to invalidate his contention.

On December 12, 1941, it sailed with nearly 800 Jews from the port of Constanta, Romania for Palestine.

Three days later, its engine failed in Turkish waters and the helpless ship was hauled to Sarayburnu harbor in Istanbul. But contrary to Mr. Erdogan’s claim, its passengers were not allowed to disembark –were even quarantined — as if they were all infected with the deadly Ebola virus!

Two months later, the engine-dead ship was tugged out of the harbor through Bosporus — and despite the frantic pleas of its passengers for help, and thousands of Turks helplessly watching — was coldly set adrift ten miles outside of Turkey on the Black Sea.

The next morning — February 24, 1942 — a Soviet submarine mistook the Struma for a cargo ship carrying war materials to the Nazis, and torpedoed it — plunging 782 Jews to the bottom of the sea.

Only one man survived:  David Stoliar.

Until his passing on May 1, 2014, he was a living witness to how Turkey had really treated the fleeing Jews.

Today, another humanitarian crisis is staring Turkey in the face and Ankara is fudging yet again.

The Kurdish town of Kobane at the Turkish border has been mercilessly attacked by the militants of Islamic State for more than a month.

Yes, Turkey has opened its Mursitpinar border crossing to allow Kurdish civilians cross into its territory, but is only reluctantly – and recently — permitting military hardware and some Kurdish fighters in.

The story of the murdered pooch is also revealing relative to the ongoing empty talks that are taking place between the Kurdish politicians and their Turkish interlocutors on the island of Imrali and Ankara with ramifications for Americans.

While Turkey claims to be working for “peace” with the Kurds, early this month its parliament authorized Ankara to conduct cross-border military operations against the Kurdistan Workers’ Party (PKK) and the Islamic State.

Eleven days later, The Turkish air force conducted its first operations, not against the militants of Islamic State, as Washington wants Ankara to do, but the de facto allies of Coalition forces, the PKK.

America’s desperate search for a reliable ally in Ankara is a fool’s errand no different than the Kurdish pursuit of peace in the Turkish capital.

In other words, Mr. Erdogan likes Kurds and Americans as much as he likes the dogs.