The last few years have seen, in countries around the world, people taking to the streets in protest over the growing income inequality, and the powers that be’s tendency to protect the wealthiest’s economic standing by inflicting austerity measures on the neediest of their citizens.

Yesterday was no exception. 100,000 people took to the street in Brussels, Belgium to protest the government’s austerity measures and free market reforms. The rally was the first in a series of events planned by Belgian trade unions which include strikes in several provinces in coming weeks, to be followed by a general strike throughout Belgium on December 15. The rail companies made low cost tickets available so that more people would attend today’s protest. 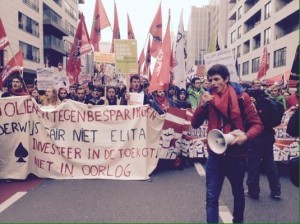 The protests were peaceful for the first couple hours, but then violence erupted. Riot police used water cannons and tear gas as they charged the rowdiest groups of protesters, who were throwing stones and fireworks, and also overturning cars and lighting them on fire. There were reports of serious injuries among both the police and the demonstrators. 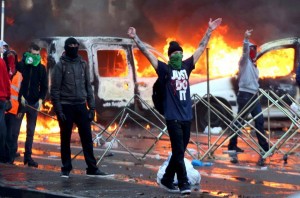 Belgium has had a long postwar tradition of collective bargaining between employers and workers, and until now, coalition governments representing a full scale of public opinion often have been able to keep unrest to a minimum. However, the current coalition, made up of three pro-business parties and the centrist Christian Democrats, has pushed for austerity measures to keep the deficit within European Union constraints while at the same time cutting taxes for businesses so that they “can remain competitive in the global market.” Sound familiar?

The austerity measures include plans to raise the retirement age and limit scope for early retirement. Also planned are a cancellation of a cost of living wage hike which was supposed to go into effect next year, as well as cuts to health and social security budgets. These austerity measures mostly affect the poor and middle class, of course. 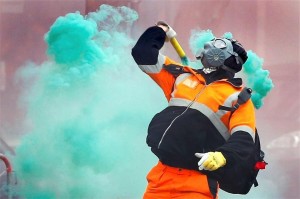 Marie-Helene Ska, secretary general of the union CSC, said the government had to look elsewhere for the money needed. “The government tells us and all of the parties tell us that there’s no alternative. We don’t contest that they have to find 11 billion euros (£8.6 billion; $13.6 billion) but we’ve been saying for a long time that it’s possible to find this money elsewhere, rather than in the pockets of the workers.”

We agree. We’ve seen the same pattern play out all over the world, where governments give huge tax breaks to the wealthiest citizens and corporations, and then suddenly decide that they need to become more fiscally responsible. Of course, the weight of the cuts thus imposed always seems to fall on the backs of the poor and middle class; the ones who can least afford any new taxes or cuts to social services. All over the world, people are rising up and saying that this is unacceptable. Will we be next?