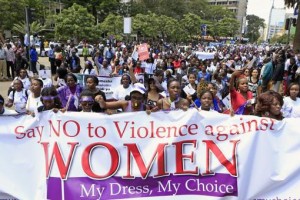 Kenya, Africa: Last week a woman was stripped naked at a bus stop by men claiming she was not dressed modestly enough (she was wearing a mini-skirt). This follows two previous incidents of the same – stripping a woman in public for her choice of attire. The incident last week was captured by video camera and was later taken down, but not before it caused outrage and brought the attention of journalists.

In the news footage, one man was filmed stating that women who dress immodestly deserve to be stripped, and that dressing this way invites rape. No one commented at the time that it is not what women wear that causes rape, it is violence perpetrated by undisciplined men that cause rape.

An online campaign on Twitter named #MyDressMyChoice has gone viral since the incident.

Women leaders in Kenya have made a public statement that the President has seven days to have the men brought to justice, or they will call on Kenya’s women to march on the statehouse to demonstrate the seriousness of the matter. Rallies were held on Monday in Nairobi.

Kenya’s deputy president has ordered that the attackers be arrested and an investigation launched. The police, however, said they cannot take the case further because the woman did not file a complaint. 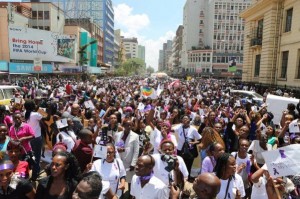 Kenya’s record of women’s rights issues is unique. It wasn’t until 2001 that the country adopted an anti-FGM (female genital mutilation) law, and as late as April of this year, 12 and 13 year-old girls are still dying after undergoing the botched, illegal procedure. Some guardians and parents are even burying these girls in secret to avoid prosecution.

Kenya is at a crossroads in their progression in development. Somewhere between the culture of Africa the way it has always been and the new, modern culture that extolls the values of western civilization, the country is perplexed on moving forward.

A few tips that may (or may not) be appreciated by men intimidated by independent women in a modern environment include;

Unfortunately, this list is not exclusive to Kenya. Across the planet, women are subjected to violence, discrimination and oppression in nearly every country on the planet.

Is it better to lead by example or follow in blind ignorance?

THIS IS A GLOBAL ISSUE!