On Tuesday, November 4, Iguala Mayor Jose Luis Abarca and his wife, Maria de los Angeles Pineda were arrested in Mexico City. Described as the “probable mastermind” in the disappearance of the students, Abarca was charged with six counts of aggravated homicide and one count of attempted homicide a week later. 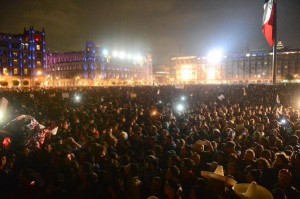 The Mexican government so far has arrested almost 100 people in connection with the disappearance and presumed deaths of the students. However, we have to wonder how much of this is for show, as the bodies still haven’t been recovered, other than one of the students whose mutilated body was found shortly after the disappearance. Officials presently are examining remains that they believe belong to the missing students, but they’ve said that before.

As the protests have expanded, they’ve become just as much about the endemic corruption in Mexico as they are about the students. An example: a couple weeks ago, Carmen Aristegui, a leading Mexican journalist, published on his website that Grupo Higa, a company associated with the country’s first high-speed rail contract, is the owner of a $7 million mansion that Mexico’s President Enrique Peña Nieto’s wife, actress Angelica Rivera, described as the “real family home” in a magazine interview. 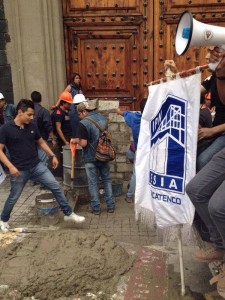 Students from the National Polytechnic Institute (Mexico) building a wall in front of the Department of Education to symbolize how they have blocked dialogue and refused to meet student demands. Photo by Revolution News via Facebook

Grupo Higa is owned by a personal friend of Peña Nieto, and benefited from contracts worth $652 million while Peña Nieto was governor of Mexico State between 2005 and 2011. Commentator Silva Herzog said; “There have always been rumors, but we have never before had documents that suggest that a president in office has participated in illegal operations.”

The corruption at all levels of the government is seen by many (and rightfully so) as the underlying cause of many of Mexico’s problems such as the stagnant economy and the breakdown of law and order that’s led to the cartels controlling parts of the country. 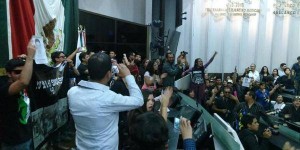 Yesterday, massive protests took place all across Mexico. Tens of thousands of demonstrators gathered in  Mexico City’s main plaza, carrying torches and bellowing “Out with Peña!”  A 30 foot tall effigy of Peña Nieto was set ablaze. Leading political commentator Jesús Silva Herzog said; “The drama of Mexico is about impunity. This is not about the popularity or unpopularity of the president, that is irrelevant. It is about credibility and trust and, at its root, it is about legitimacy.”

As we pointed out in our earlier story, we in the US are the ones who bear a large amount of the responsibility for the unrest happening south of the border. We’ve sent $3 billion in “security” aid to the Mexican government through the George W. Bush–era Mérida Initiative (which has been extended indefinitely by President Obama) and through counternarcotics programs run by the Defense and Justice departments, all in the name of fighting the war on drugs. At the same time, the DEA propped up the Sinaloa cartel in exchange for information on its rivals, leading to more violence. 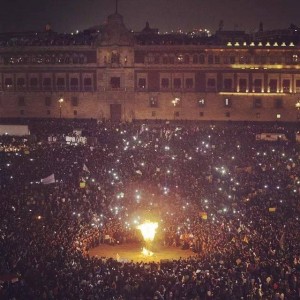 The White House and the national media not so surprisingly have remained silent on the unrest. We’d like to believe it’s shame that’s causing the silence. Shame over the 100,000 dead and 20,000 missing in the eight years since then-President Felipe Calderón, with US backing, declared war on the drug cartels. Shame over the fact that our unwinnable war on drugs has given rise to a $30 billion industry that’s corrupted the Mexican government, army and police at all levels, and has led to all the bloodshed. Shame over bringing a beautiful country and people to the brink of ruin. Mexico’s blood is on our hands.