Yesterday, the Daesh launched an assault on Kobani. Now, you might not think this is news; especially if you follow us, as we’ve written about Kobani on numerous occasions. However, this attack was different.

The assault began with a suicide attack by a bomber in an armored vehicle on the border crossing between Kobani and Turkey, said the Britain-based Syrian Observatory for Human Rights. In other words, the attack came from inside Turkey.

Nawaf Khalil, a spokesman for Syria’s Kurdish Democratic Union Party, stated that the Daesh “used to attack the town from three sides. Today, they are attacking from four sides.” 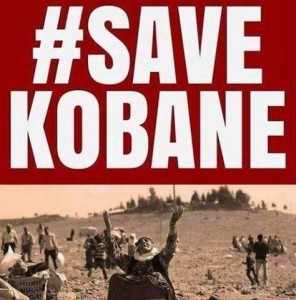 Turkey denied that they were hosting the Daesh, saying that the attackers didn’t enter Kobani through Turkey. A statement released from the government press office at the border town of Suruc said; “Claims that the vehicle reached the border gate by crossing through Turkish soil are a lie. Contrary to certain claims, no Turkish official has made any statement claiming that the bomb-loaded vehicle had crossed in from Turkey.”

Mustafa Bali, a Kobani-based activist, said by telephone that Daesh fighters have taken positions in grain silos on the Turkish side of the border. “It is now clear that Turkey is openly cooperating with Daesh,” he said.  From there, he said, they’re launching attacks toward the border crossing point.

In a television interview on Friday night, Syrian Foreign Minister Walid al-Moallem said that the U.S.-led coalition’s weeks of airstrikes against militants in Syria had not weakened the Daesh, and that Washington and the U.N. Security Council “should force Turkey to tighten control” of its border in order to help defeat them.

However, that’s easier said than done. We’ve called out the Erdogan government before for seeming to support Daesh at the expense of the Kurds along the border, and for its persecution of the Kurds living in Turkey. This latest attack seems to be more of the same.