They went on to say “the Israeli enemy committed a heinous attack by targeting two peaceful areas in the Damascus countryside”. No casualties were reported.

Israel did not confirm the strikes, and the IDF said it does not comment on “foreign reports.”
Prime Minister Benjamin Netanyahu said that Israel was following developments in the Middle East with great interest, because “a great deal is happening.”

“We will remain constantly with our hand on the pulse, and we will deal with these threats and challenges because they do not take a time-out. We will deal with them with the same degree of responsibility that we have done up until now.” 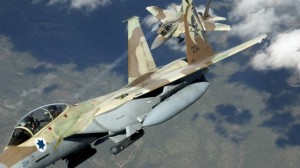 The reason for the strikes isn’t clear. The Syrian Foreign Ministry sent letters to the UN Security Council and to Secretary-General Ban Ki-moon accusing Israel of carrying out the air raids to cover up its own internal problem. The Ministry also called for action against Israel to ensure the attacks do not continue.

Some think that the strikes were to stop shipments of weapons from Syria to Hezbollah forces in Lebanon that had originally come from Iran.  Others claim that the strikes were to stop shipments to the Hezbollah forces, but the weapons were Russian anti-aircraft missiles brought in by Russian cargo planes.  One thing is clear, though; what was a volatile situation before’s become even more so.

Syria and Israel have officially been at war for years, and these aren’t the first air strikes carried out by Israel against Syria since the current civil war in Syria began back in 2011. However, the last thing that’s needed at the present time is another outside player getting into the action, and especially not Israel. The Middle East is a powder keg on the verge of exploding; further Israeli action could very well be the match that sets it all off.