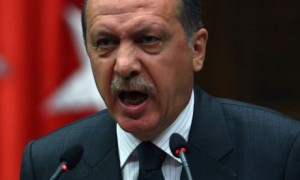 On Sunday, December 14, Turkey arrested 27 journalists, media workers and police officers, accusing them of supporting an influential Muslim cleric whom President Recep Tayyip Erdogan has accused of attempting to overthrow his government.

“This is a reckless move toward dictatorship. It is nothing else than a rough attack against media freedoms with the pretext of a ‘community operation.” Cengiz Candar, via Twitter.

This is the latest in what has been a year-long tirade that amounts to foolish drivel and a desperate man attempting to hold power in a NATO country through intensified alignment with Islamism; denial of his population’s heritages; violations of human rights; breaking international laws and treaties; as well as further demonstrated support of certain terrorist organizations being opposed by his allies.

Last December while Erdogan was still Prime Minister of Turkey, there were “intercepted telephone calls between Erdogan, his son Bilal, ministers and close confidantes — sound files which have been appearing on the Internet in recent weeks — have also damaged the prime minister. The phone call recordings are intended to prove that he is corrupt and that he tries to influence both the judiciary and the media. Erdogan himself has confirmed that some of the recordings are authentic.

“But I can’t say who leaked the recordings,” Baransu says. “They are definitely real. Everybody knows that the government is extremely corrupt.” (Spiegel.de)

Erdogan’s attempts to squelch the story failed, and by March, 2014, leaks of the alleged corruption scandal broke – not on his state-run media outlets – but on youtube and twitter accounts. His reaction was to shut down access to youtube and twitter for the entire country. This had no influence when it came election time, and Erdogan ascended from his role of PM to that of President with as much arrogance as Putin used while claiming rights over the Crimea.

Erdogan’s actions were just a precursor to what was to come. Not necessarily in chronologocal order, he has continued to prove his lack of leadership by trying to prove what a tough leader he is. Examples include:

Other considerations include: “Worried about corruption investigations and intent on holding on to power, Turkish President Recep Tayyip Erdogan is setting up a shadow government,” in an article published December 12 titled “Shadow Government Set Up In Erdogan’s White Palace.” Many are asking if Erdogan is attempting to rewrite history to fit his own religious and political beliefs.

Now, with Putin giving him accolades for standing up to the EU, he is calling for the arrest for Fethullah Gulen, a cleric who has been living in Pennsylvania on a self-imposed asylum since 1999. Erdogan expects the United States to extradite Gulen, calling him a leader of a terrorist organization; Hizmet (translated to mean “Service”). His call for Gulen’s arrest lands on the one-year anniversary of his own corruption scandal – perhaps a desperate move to divert attention from his own mistakes and blunders.

Most offensive and unaddressed is the obvious support he provides Daesch (ISIS) through porous borders for those wishing to join the fight. Recruiters tell them to simply get to Turkey, and then they can join up with Daesch easily. Turkey is the only place black market oil stolen by Daesch is bought and transferred to legitimate markets. Erdogan wants Syria’s Assad to be defeated, yet will do nothing to help the Kurdish forces in northern Syria maintain supply lines or allow Kurds to cross the same borders that Daesch fighters cross back and forth routinely.

For all these, and more to numerous to mention, we name him the most insecure, desperate, backstabbing and dishonorable nation leader in the entire Middle East.

Congratulations, Mr. Erdogan – may no one try to take this achievement away from you!

Editorial Note:
News of our disdain for Erdogan is actually not new. Past articles began with A Martyr For Democracy” on March 14, Gobbling Up Twitter on March 22, Disingenuous Behavior and Call For Action in October, World Kobani Day vs. Turkey’s Foul Position on November 1, More Foul Turkey, and two guest pieces: ISIS-Turkey Links and Islamic State Murders Erdogan’s Dog.