On December 22, 2014, Daw Khin Win, a 56 year old woman, was shot and killed in Moegyo Pyin, Myanmar (also known as Burma) by police while protesting the expansion of a Chinese copper mine. This has led to protests in Myanmar’s two largest cities; Yangon (Rangoon) and Mandalay, as well as a standoff in the area of the mine itself. But, how did this all start? 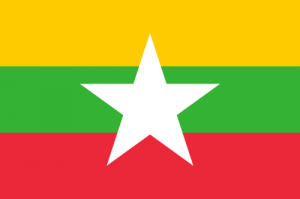 Flag of Myanmar via Wikimedia Commons

We need to go back to 2008 and what was promoted as Myanmar’s first steps towards a democracy after being ruled by the military since 1962; a new constitution. While supposedly providing for a freely elected government, it also reserved 25% of the legislature’s seats for the military. A nationwide referendum on the new constitution was held at the same time Cyclone Nargis was becoming the worst natural disaster in Myanmar’s history.

The constitution also called for elections, which were scheduled to happen in 2010. The military-backed Union Solidarity and Development Party declared victory with a claimed 80% of the vote. The United Nations, various Western countries and pro-democracy groups claimed the elections were fraudulent, and that the military regime had committed rampant fraud and intimidation.

The mine has never been popular with the people, and the police violence isn’t unprecedented. The joint venture has confiscated thousands of acres of land so far, and there’s crop and other environmental damage around the mine. The fact that it’s the military in a joint venture with the Chinese who are calling the shots only adds fuel to the fire. In November 2012, more than 100 people were injured, with at least 67 of those being Buddhist monks, when police fired white phosphorus smoke bombs to disperse the protests.

The Myanmar government is facing increasing criticism both at home and abroad for rights abuses, which include cracking down on the press and protesters.  More than fifty organizations and political parties issued a statement this week condemning the government for the police response in Moegyo Pyin. So, what do they do? Become even more restrictive, of course.

The township administrator of Salingyi, Sagaing Region, authorized the extension of Emergency Act 144 in the Letpadaungtaung project area for two months, until the end of February. What is Emergency Act 144? As far as we’re able to find out, it’s a law rolled out occasionally by the Myanmar or local governments which outlaws gatherings of more than five people, allows for setting and enforcing a curfew, and other such restrictions on the right to peacefully assemble. It had been put into effect shortly after the shooting, and had been scheduled to expire at the end of the year.

The protesters for their part gave the authorities until tomorrow to come and discuss the issue with them, warning that failure to come to terms would lead to larger protests. We’d like to believe that the two parties can sit down and come to an acceptable compromise, but we aren’t optimistic about that happening.

If anything, the events of the last couple weeks reinforce our belief that nothing’s really changed in Myanmar since the election. The military’s still calling the shots, and they’ll do whatever it takes to get what they want. The people of Myanmar deserve better; they’ve suffered more than long enough.