We might hear something about Muammar Gaddafi and the Libyan state’s sponsorship of terrorist organizations during his forty years in power. We might hear something about World War II and the North Africa campaigns. We might even hear that Libya has the world’s tenth largest proven oil reserves. What we more than likely wouldn’t hear about though is Libya Spring and the current civil war.

You might be thinking to yourself; “Current civil war? I thought that was mostly settled with the ouster of Gaddafi in 2011.” Well, yes and no. 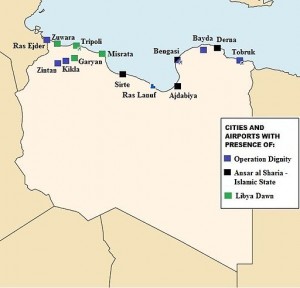 In July of 2012, Libyans held the first elections since the fall of Gaddafi. A month later, the National Transitional Council handed power over to the General National Congress (GNC). The GNC elected a Prime Minister, Mustafa A.G. Abushagur. Meanwhile, Islamist extremism was becoming more prevalent, with unnamed organized groups bulldozing a Sufi mosque with graves in broad daylight in the center of the Libyan capital Tripoli. This was followed by the attack on the US counsulate in Benghazi and the death of Chris Stevens.

Abushagur stepped down in October, as he could not get the Libyan parliament to approve his cabinet. A week later, the GNC elected elected former GNC member and human rights lawyer Ali Zeidan to be Prime Minister. Zeidan was sworn in and his cabinet confirmed.

In June 2013, Nouri Abusahmain was elected by the GNC to be its president following the resignation of Mohammed Magarief. An Islamist who was considered to be a compromise candidate, Abusahmain soon proved to be anything but moderate. One of his first acts was to set up the LROR (Libya Revolutionaries Operations Room), an Islamist organization which attempted a coup later on that same year by kidnapping Ali Zeidan. Remember the LROR – they’ll appear again later. 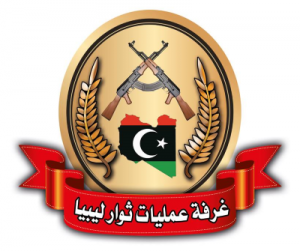 At the end of 2013, the GNC voted to enforce sharia law throughout Libya, and refused to step down at the end of the term. On February 14, 2014, General Khalifa Haftar ordered the GNC to dissolve and called for the formation of a caretaker government committee to oversee new elections. The GNC refused.

On May 16, forces loyal to General Haftar launched Operation Dignity, a large scale air and ground offensive against armed Islamist groups in the Benghazi area. Two days later, Haftar’s forces tried to forcibly dissolve the GNC in Tripoli. While this didn’t work, it did prevent the GNC from blocking the June elections. In the elections, the Islamists lost by a landslide, and the Council of Deputies was appointed to take the GNC’s place.

On July 13, a coalition of Islamist groups afraid of losing power launched Operation Libya Dawn. After fighting for two months, they seized the Tripoli international airport, and hold power in western Libya. Their main goals include defending the presence of Islamist military groups to the east, restoring the GNC back to power, and bolstering the influence of political Islam in the country.

Members of the coalition include the previously mentioned LROR, the Muslim Brotherhood, the Libyan Shield Militia (another militia that’s semi-supported by the old government) and the Tripoli Brigade. Their allies in the east around Benghazi include the February 17 Battalion, the Rafallah Sahati Brigade, Libya Shield 1 and other Islamist groups. And, while Libya Dawn’s been on the record as denouncing Ansar al-Sharia (the group behind the Benghazi attack) for being an terrorist group, many observers believe that they’re part of LIbya Dawn’s eastern allies.

The battle shows no signs of letting up, either. The Libya Dawn government in Tripoli says it will not honor visas issued by the government in Tobruk, and vice versa.  The two largest ports for exporting Libya’s oil have closed due to fighting, and several oil storage tanks at one of the ports (Es Sider) have been on fire for days.

We’ll be watching the situation in Libya closely. Libya’s the last stronghold in North Africa of the Muslim Brotherhood and other Islamist militias; we doubt they’re going to go away peacefully. To us, it resembles nothing more than the fighting that’s gone in Somalia for the last twenty years, but with the added incentive of oil revenues for the victor.