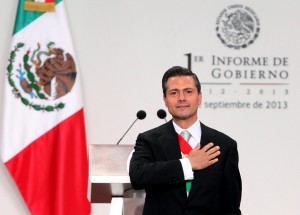 This Tuesday, President Obama and Mexican President Enrique Peña Nieto began a series of meetings in Washington DC. Trade was naturally high on the list of topics to be discussed; Mexico buys and sells more US goods than any other country than Canada – more than $500 billion a year. Immigration was another obvious topic; an estimated 6 to 7 million undocumented Mexicans live in the US, and send home to Mexico an estimated $20 billion per year.

However, there was another topic that was discussed; the 43 students from a teacher’s college in Ayotzinapa who were last seen being taken away by police the night of September 26. We’ve previously written about the disappearance and subsequent protests in Mexico. However, Tuesday’s meeting was marked by protests outside the White House and in Latino communities throughout the US.

In a Monday press release, a senior White House official expressed confidence that the Mexican government will bring those responsible for the students’ disappearance to justice, and cited the arrest of 70 suspects as evidence. However, the protesters didn’t share the confidence that the administration has. Instead, they called for the ousting of Peña Nieto’s government, and the reconsideration of the Merida Initiative, a joint security partnership that has seen the US giving Mexican security forces more than $2 billion since 2008. The funding for the initiative, which comes from we the taxpayers, comes with conditions, including that Mexico investigate police abuses.

Human Rights Watch wrote a letter to President Obama about the human rights violations occuring in Mexico under the Peña Nieto administration. In the letter, they claimed that Peña Nieto’s government “has largely failed to follow through on its own initiatives” to make the country safer, and called on the president to “ask [Peña Nieto] to explain exactly what steps he is taking to ensure that Mexico prosecutes abuses.”

They went on to mention the conditions, noting that: “Despite unequivocal evidence—including cases documented in the State Department’s own reports—that Mexico has failed to meet these requirements, your administration has repeatedly allowed the funds to be released,”

The protesters for their part noted that Peña Nieto hasn’t even bothered to visit Iguala, the place where the students were abducted. They cite recently uncovered evidence that the Mexican Army and Federal Police had knowledge of the incident before, during, and after it occurred, and indeed had participated in the crime.

President Obama told reporters after the meeting; “Our commitment is to be a friend and supporter of Mexico in its efforts to eliminate the scourge of violence and the drug cartels that are responsible for so much tragedy inside Mexico.” He also stated that it would be up to the Mexican authorities to bring the perpetrators to justice.

Our supposed “war on drugs” is what’s been the cause of the vast majority of the misery and violence in Mexico over the last forty years, not to mention the ruination of minority communities here in the US. From the birth of the for-profit prison system, which grew by leaps and bounds due to the sheer number of people, mostly from minority communities, being incarcerated for non-violent drug crimes, to the horrors inflicted on the Mexican people by the cartels, to our support to the Mexican authorities being redirected to the cartels, to the sheer corruption endemic in every sector of the Mexican government; we’ve created a monster.

Occupy World Writes stands in solidarity with the people of Mexico. We’re aghast at the corruption of the current government, the police and the army. We’re horrified by the daily violence brought to the people by the cartels. We join our voices to theirs in demanding change.