The US media has been almost entirely focused on the attack on the Charlie Hebdo offices in Paris and the subsequent manhunt. Flashy and bloody stories, especially those which support the idea of militarized police as a necessary evil in today’s society, are the media’s bread and butter. And, the media will usually overlook stories of protests both here in the US and in other countries. Hence, you may not have heard about the protests in Brazil. 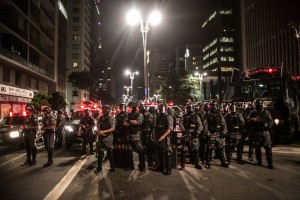 A group of Brazilian citizens called the Free Pass movement were the organizers of the demonstrations. What were the protests about? A raise in transportation fares. In São Paulo, the city with the largest demonstrations, fares went up by 17%. In 2013, the Free Pass movement was successful in getting the government to revoke a 7% increase, and they hoped to put the pressure on the government to do the same again.

The Free Pass organizers claimed that 30,000 people participated in the demonstrations; the police claimed between 2000 and 5000, depending on which account you read. What started as a peaceful protest turned violent, with police using tear gas, rubber bullets and pepper spray to disperse the crowds. Over 50 people were arrested. 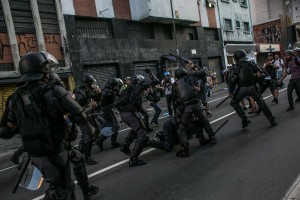 The police, as usual, blamed the escalation on the protesters. The Free Pass movement denied the police’s account, saying; “The MPL did not direct aggression towards the police or other acts of vandalism.”

The Brazilian government’s facing some very serious economic issues. Inflation increased at the fastest pace since 2011, driven by an 8% increase in food prices and a 8.8% surge in housing-related prices. At the same time, the economy only grew 0.15%. Meanwhile, the state-owned oil company Petrobas is involved in a bribery scandal, and the country’s corporate bond market is sinking.

The 2013 Fare hike protests led to larger protests across Brazil against the quality of social services and corruption. We wrote about the World Cup protests of last summer. We have to think that Friday’s protests were just the beginning of many demonstrations to come this year.