On Monday and Tuesday, the Heritage Foundation and Heritage Action for America held a conservative policy summit in Washington called Opportunity for All, Favoritism for None. The panel discussion topics were what you’d expect at an event like this, ranging from controlling government spending and free market energy solutions to abortion policy and gay marriage. 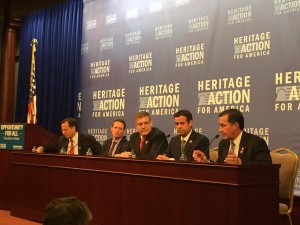 Photo By Heritage Action for America

Were there women participating? Yes- some of the discussion panels had women moderators, but all of them were policy analysts from think tanks and the like. We find it hard to believe that out of the four women senators and nineteen congresswomen from the Republican Party currently serving in Congress, none of them were qualified to speak about such issues as the family and marriage, for example. And, we’d be willing to bet that there weren’t any LGBT people in the panel discussion on gay marriage, but we digress…

Out of twenty two committees in the House of Representatives, only one is chaired by a woman. We wish we could say this surprises us, but it doesn’t. The left is just as guilty as the right in this regard; gender discrimination and inequality is still the name of the game when it comes to politics, as it is with so many other facets of our society.  We need to fix this situation.