Today marks the fifth anniversary of the Citizens United v Federal Election Commission decision. In this landmark case, the Supreme Court ruled that independent political expenditures by non-profit corporations are protected under the First Amendment and not subject to restriction by the government. The ruling has also extended to for-profit corporations, unions and other organizations.

Mind you, this doesn’t mean that corporations can contribute directly to candidate campaigns; that is still illegal under Federal law. What it does do is prohibit the government from restricting political expenditures by corporations and unions other than direct contributions to individual campaigns.

The Citizens United ruling, along with the Speechnow.org v FEC ruling by the DC District Court (which used the Citizens United ruling as precedent) gave birth to what we now call superPACs. Normal PACs (Political Action Committees) have been around since 1944, when the CIO formed the first PAC to aid the reelection of Franklin Roosevelt. Because it was funded by individual union member donations and not by the union treasury, it did not violate the Smith Connally Act of 1943, which forbids unions from contributing to federal candidates. 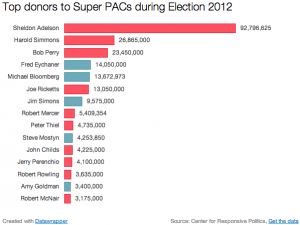 SuperPACs, on the other hand, make no contributions to candidates or parties. Super PACs may raise unlimited sums of money from corporations, unions, associations and individuals, then spend unlimited sums to overtly advocate for or against political candidates, but they can’t donate directly to individual campaigns.

Many of these superPACs register as 501(c)(4) “social welfare” organizations. Originally, these organizations’ funds were to be exclusively used for social welfare, but in 1959, the IRS ruled that these organizations could participate in some political activity as long as politics isn’t their primary purpose. The big advantage to 501(c)(4) status (besides being tax exempt) is the ability to collect donations without disclosing donors.

As of January 19, 2015, 1,291 groups organized as Super PACs have reported total receipts of $688,826,115 and total independent expenditures of $344,172,141 in the 2014 cycle, according to OpenSecrets.org. That’s $350 million spent on a midterm election by superPACs. This amount is the same amount that George W. Bush spent in his 2004 Presidential campaign, and is over $100 million than Bill Clinton spent in both his Presidential campaigns combined.

This granting of what were thought to be personal rights to corporations has set other dangerous precedents. For example, we doubt that you never would have seen Burwell v Hobby Lobby, where the Supreme Court ruled that closely held” for-profit secular corporations like Hobby Lobby are exempt under the Religious Freedom Restoration Act (RFRA) from providing certain contraceptive methods to their women employees due to the owner’s religion, without the Citizens United case. Yes, corporations have a religion; we’d like to know where the corporation goes to church. But, we digress…

There were rumors before the State of the Union speech last night that President Obama would announce an executive action that would require businesses contracting with the government to disclose political contributions after contracts have been awarded. This would have been a step towards transparency; perhaps that’s why it didn’t happen. But, we digress again…

What can we do to stop corporate interests from buying our elections, and hence our government? We’ve written before about Move to Amend and their campaign to amend the Constitution to firmly establish that money is not speech, and that human beings, not corporations, are persons entitled to constitutional rights. We urge you to contact your Congressthing and let it know that you support such an amendment, and that you expect it to represent your wishes or suffer the consequences.

And, we’d like to throw a challenge out there for Anonymous and other hacktivist groups. Wouldn’t it be fun to hack into the various 501(c)(4) organizations and find out exactly who is giving what to these dark money groups, and then make the information public? You’d be doing the country a huge service by doing so, and let’s face it – what could be a more worthwhile target?