Yesterday, Yemen’s president and cabinet resigned. This is just the latest event in a political crisis that began earlier this week when Shiite Houthi rebels took control of much of the capital, Sanaa, and surrounded the presidential residence. 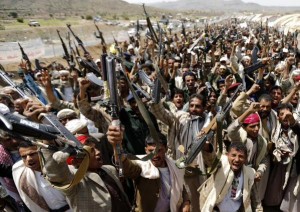 Even if your only knowledge of Yemen comes from the national media, we feel you can see why we think it’s important. You probably have heard that the Kouachi brothers, the two responsible for the Charlie Hebdo attacks, trained in Yemen. You might remember the recent failed rescue attempt where the captives, American photojournalist Luke Somers and and South African teacher Pierre Korkie, were killed in the firefight. You’ve more than likely heard of the numerous drone strikes we’ve carried out there against Al-Qaeda; the number isn’t certain, as we’ve seen claims of anywhere from 72 to 200 drone strikes targeting AQAP (Al-Qaeda in the Arabian Peninsula) in Yemen over the last decade. 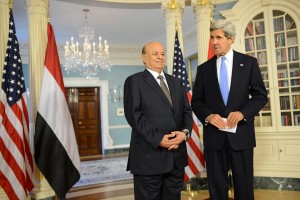 This brings up the first problem. You see, those drone strikes were approved by the former Yemeni President, Abed Rabbo Mansour Hadi, who took power in 2012 with our backing. The US considered its actions in Yemen as a template for confronting jihadist threats in other areas in the Mideast. These include using a small amount of trainers to work with Yemeni security forces instead of having large numbers of troops on the ground and using drones for surveillance and airstrikes against AQAP.

The Shiite Houthi rebels who took over much of the capital, on the other hand, are very much against further US intervention, and at the same time are fighting against Al-Qaeda. Who’s providing support to the Houthi? Iran.  Which, of course brings up Israel and Benjamin Netanyahu’s upcoming address to a joint session of Congress that we discussed yesterday.

To precariously dangle and risk Iran’s anger in order to score points in our Congress’s dysfunctional squabbling, we have further jeopardized the stability of every county in the Middle East except Israel, and most clearly that of Iran. These are REAL war games, not a computer model from a movie in the 70’s with a scientist that can reset everything when things get close to all out war. 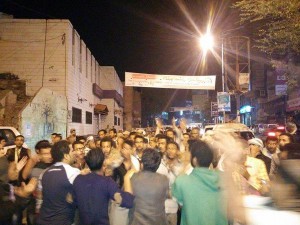 Student protest in Ta’izz, Yemen against Houthis. Photo via Twitter

The geopolitical climate throughout the region will also be dramatically affected by another event that occurred yesterday; the death of Saudi Arabia’s King Abdullah. If the United States attempts to exercise any influence in the Saudi transfer of power to their named heir to the throne, the entire region will explode in outrage.

The cable news reaction was telling. Al Jazeera gave substantial coverage to the crisis, devoting the first twenty minutes in an hour’s newscast to it. What were CNN, MSNBC and Fox covering? Tom Brady’s news conference about whether footballs were intentionally deflated during last Sunday’s playoff game. Really, people? THIS is more important than the Yemeni government falling?

The US policies for the last 40 years in the Middle East have resulted in nothing but more outrage, turmoil, tribal fighting and rebel strongholds. Forcing our way into Yemen at this most precarious time could result in the shutdown of the entire Persian Gulf area. With Somalian rebels hijacking ships being the next door model of gaining world attention and funding, the government of Saudi Arabia going through a transfer of power, the advance of Al-Qaeda, Daesch and Boko Haram, we need to question why US involvement should be anything but humanitarian aid when and where needed. Perhaps then we will see a de-escalation in the part of the world that we misunderstand on a daily basis.

The Yemeni people, despite what we may think, have a right to self determination and self-governance.  Over and over, the US has gone in to disrupt where governments were not “friendly” toward US interests. Maybe those interests did not align with the people of that country. Maybe that is why no one wants us there except us. If we don’t wish to see Yemen continue to cycle through a failed-state process, we need to convince the western powers to let them be.