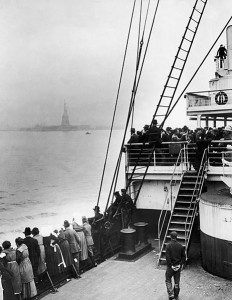 Immigrants on a ship approaching New York City, bound for Ellis Island, with the Statue of Liberty in the background. Image via Wikimedia Commons.

They probably can’t tell you what “EB-5” is, and how foreigners can literally buy their way into the country for writing a $500,000 check that accelerates their path to citizenship.

United States Citizenship and Immigration Services (USCIS) “administers the Immigrant Investor Program, also known as “EB-5,” created by Congress in 1990 to stimulate the U.S. economy through job creation and capital investment by foreign investors. Under a pilot immigration program first enacted in 1992 and regularly reauthorized since, certain EB-5 visas also are set aside for investors in Regional Centers designated by USCIS based on proposals for promoting economic growth.”

This is how it works: Foreign investors and their families get green cards and a chance at full U.S. citizenship by writing checks of $500,000 or more to fund an American economic development project. The project must create 10 full-time American jobs per investor. Eight-five percent of the EB-5 investors are Chinese.

In a recent feature regarding the EB-5 program, Al Jazeera interviewed one family that has taken advantage of EB-5. “After fleeing the Nazis during World War II, the von Trapp family — yes, those von Trapps — settled in the mountains of Vermont and opened a picturesque resort nestled in ski country.

Known around the world as the musical family that inspired “The Sound of Music,” one of the last surviving relatives has launched a new chapter for their famous surname: Trapp Lager.

Five years after they started making their beer, Johannes von Trapp and his son Sam von Trapp said they couldn’t brew enough to keep up with demand. They were making the beer in the basement of an old barn and needed money for a new brewery. They turned to a little-known and controversial government program called EB-5.”

Although the association to the von Trapp family makes the program seem charming, there is a dark side to this. Not all business ventures invested in succeed, and not all those writing the $500,000 checks are as honorable as all other participants.

The concept that the wealthy foreign nationals can skip the line for a green card is at odds with America’s traditional immigration story. Chinese billionaires aren’t exactly “your tired, your poor, your huddled masses yearning to breathe free” famously inscribed on the Statue of Liberty.

“I don’t think we should be selling visas to people whose principal claim to fame is that they’ve got some money,” said David North, a senior fellow at the Center for Immigration Studies, a think tank that advocates for less immigration. “We have an obligation as a country to take on some refugees and some asylums. We have an obligation to let citizens marry somebody who’s not a citizen. These are real obligations. I don’t think that bringing in somebody with half a million dollars is an equal obligation.”

Apparently those in Congress that continue to fund this program have no issue with anyone entering the country that already has some money. It is only those running for their lives and attempting to reunite with their families that do not deserve a path to citizenship. I know my great-great grandparents arrived in this country with no wealth other than determination and the willingness to work. Sound familiar?