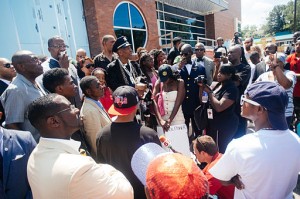 Sunday evening, on the eve of the six-month anniversary of the police shooting of Michael Brown, a group of civil rights lawyers filed a pair of lawsuits on behalf of 11 residents of Ferguson and 9 residents of Jennings; two suburbs of St. Louis, Missouri.

The lawsuits claim the cities involved have pursued the “policy and practice … to jail people when they cannot afford to pay money owed to the city resulting from prior traffic tickets and other minor offenses without conducting any inquiry into the person’s ability to pay and without considering alternatives to imprisonment as required by federal and Missouri law.”

They also claim that the plaintiffs, all African-American, were held in jail “as a means of coercion to get them to pay fines, with police and jail officials arbitrarily changing the amount of fines to coerce family members or friends to bring them enough cash to satisfy the amount owed,” according to a press release.

In the 1983 decision Bearden v Georgia, the U.S. Supreme Court ruled that:

(a) If a State determines a fine or restitution to be the appropriate and adequate penalty for the crime, it may not thereafter imprison a person solely because he lacked the resources to pay it. Williams v. Illinois,399 U. S. 235; Tate v. Short,401 U. S. 395. If the probationer has willfully refused to pay the fine or restitution when he has the resources to pay or has failed to make sufficient bona fide efforts to seek employment or borrow money to pay, the State is justified in using imprisonment as a sanction to enforce collection. But if the probationer has made all reasonable bona fide efforts to pay the fine and yet cannot do so through no fault of his own, it is fundamentally unfair to revoke probation automatically without considering whether adequate alternative methods of punishing the probationer are available to meet the State’s interest in punishment and deterrence.

Alec Karakatsanis, a co-founder of the civil rights non-profit Equal Justice Under Law, one of the groups representing the plaintiffs in the lawsuits, said:

“What we’re seeing is a growing effort to generate revenue off the backs of the poorest using the police and court system. When you actually talk to the people living in the communities, one of the most central issues is the constant harassment and threat of incarceration because of their poverty.”

In 2013, Ferguson, a city of 22,000 people, issued nearly 33,000 arrest warrants for unpaid traffic violations and other minor offenses, many of those to non-residents of the city. Court fines and fees were the city’s second-largest source of income that year; $2.6 million or about 21 percent of its total budget. In Jennings, the St. Louis County Police Department’s been under contract to supply the city with police services since 2011, when the city’s police department was disbanded due to internal corruption, including missing money. We think we see a pattern developing…

Events in Ferguson last fall started a national conversation about police brutality and militarization. We hope that these lawsuits start another national conversation; this one about communities who use minor violations of the law as a primary revenue stream, and the for-profit companies supplying correctional services who aren’t bound by any laws over what fees they can charge. It’s a conversation that’s long overdue.