Demonstrators rise up against attacks on voting and women’s rights, economic justice, public education, equal protection under the law, and more

Rallying around a 14-point “People’s Agenda,” thousands gathered in downtown Raleigh, North Carolina on Saturday for the annual Moral March calling for livable wages, environmental justice, healthcare for all, an end to racism and inequality, and more.

The movement stands in opposition to “the extreme and regressive agenda being pushed in North Carolina”—an agenda it says is “a reflection of what is happening across the United States.”

Organized by the state NAACP and more than 100 advocacy groups, the march is an extension of the Moral Monday actions that have been taking place in North Carolina since 2013. Participants will challenge recent attacks on voting and reproductive rights, economic justice, public education, equal protection under the law, and more, under the banner “Forward Together, Not One Step Back!”

“This is our Selma,” Rev. Dr. William Barber, president of the North Carolina NAACP, told journalists in a press call earlier this month, invoking the 1965 civil rights marches in Alabama that led to passage of the Voting Rights Act and were recently represented on the big screen. “Selma can’t merely be a movie, it must be a movement we engage in now. Everything they won in Selma is now being attacked and North Carolina is the clearest example of that.” 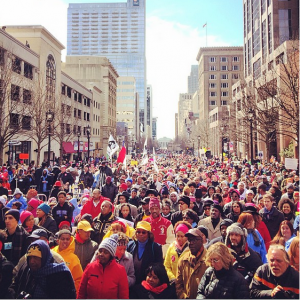 This year’s Moral March. Photo by Kaitlyn Barlow via Facebook

As The Nation reports:

Moral Monday activist have fought the legislature’s policies in the streets, in the courts and at the ballot box over the past two years. Over 1,000 people have been arrested during demonstrations at the legislature. The North Carolina NAACP has held 200 events in fifty-four counties. Young activists registered 5,000 new voters during the ‘Freedom Summer 2014’ campaign. Moral Monday spinoffs have begun in many other states.

In an op-ed published Thursday, Barber wrote: “If we continue steadfastly in a powerful moral movement to hold elected leaders accountable, we can restore the heart of politics and democracy in North Carolina. The heart is where we integrate what we know in our minds with what we know in our bones—the place where our knowledge can become more fully human. We can never waver on these matters of moral principle, including economic justice through labor rights and fair living wages, equal education and funding for quality public schools, access to health care and the promise of a clean planet.”