On Saturday night, a Canadian National Railway (CN) train with 100 tank cars of crude oil derailed about 80 kilometers south of Timmins, Ontario. The derailment was on the CN mainline, in an area inaccessible by road. 29 cars jumped the track, and seven were still burning the following afternoon. An unknown amount of oil was spilled.

Yesterday, twenty five cars of a 109 car CSX train derailed in Adena Village in Fayette County, West Virginia. At least one car ended up in the Kanawha River, while another slammed into a house. At least fourteen cars caught fire, and some exploded. Kelley Gillenwater, a spokeswoman for the state Department of Environmental Protection (DEP), said that the DEP was told the train was carrying “crude oil and possibly other materials.” 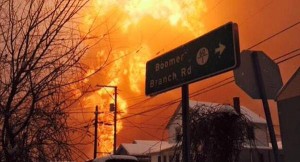 Unfortunately, exploding trains are becoming more commonplace. Last July, we wrote about the increase of oil train explosions over the last few years, and followed up a couple weeks later with an article about the proposed DOT regulations and why, in our opinion, they didn’t really address the issues either in the short term or as long term solutions.

We expect to hear a lot of talk over the next few days from various people with ties to the petroleum industry saying that the trains were following all existing safety regulations (and by all appearances so far, they were), and this shows the need for an expanded pipeline system. However, this isn’t a viable solution either. As we’ve come to find out, all pipelines leak, and in many cases, do even more damage to the environment than the exploding trains do.

A recent study suggests that all the known Arctic and Canadian oil should stay in the ground if we are to keep the global rise in temperature to 2 degrees Centigrade between now and 2050. We have a surplus of oil on the world market at the present. With all the problems inherent in the current oil delivery systems, wouldn’t this be the logical time to greatly expand our reliance on clean and renewable energy, instead of when our backs are completely against the wall?