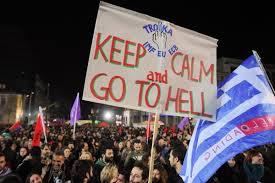 ‘Europe must cut its lossses with a program that is not working,’ declares Syriza’s finance minister Yanis Varoufakis

Without any apparent progress, talks in Brussels between the Syriza-led government of Greece and finance ministers of the Eurogroup collapsed on Monday just hours after negotiations began.

An official with the Greek delegation first told Reuters that talks were called off after finance minister Yanis Varoufakis rejected a proposal put forth by the Eurogroup ministers which essentially called for an extension of the current bailout scheme with no alterations to the terms.

“Some people’s insistence on the Greek government implementing the bailout is unreasonable and cannot be accepted,” the Greek official reportedly said. “Those who keep returning to this issue are wasting their time. Under such circumstances, there cannot be a deal today.”

Asked to describe the mood inside the room during the talks, Pierre Gramegna, the finance minister of Luxembourg, replied, “The mood was like… there was no progress.”

At a subsequent press conference, Varoufakis expressed continued optimism that a deal still can be reached but said, “Europe must cut its lossses with a program that is not working.”

“This is not a game,” Varoufakis said of the talks when asked about the possible impacts their collapse would have on the financial markets. His message to the market, he said, is that “we do not have the right to play games with the people of Europe.”

What the election of his Syriza government represents, he continued, is partly the proof that austerity has not worked. “Europe is going through the difficult process,” Varoufakis explained, “of understanding that Greece has a new government committed to changing a program that has clearly failed in the eyes of everyone who doesn’t have a vested interest.”

From the outset, both Varoufakis and Prime Minister Alexis Tsipras have said they would not accept an extension of the very program they were elected by the Greek people to end. In place of a continuation, Greece said it will accept a new structural program that would tie future lending to economic growth as part of a new set of conditions attached to the disbursement of funds. In fact, Varoufakis said, he was quite ready to sign an agreement put forth at the meeting, until it was quickly withdrawn.

According to the Guardian’s live-coverage of the press conference:

Varoufakis states that [French finance minister] Pierre Moscovici presented him today with a draft communique that he was “perfectly happy to sign there and then.”

But then, he claims, it was withdrawn by eurozone chief Jeroen Dijsselbloem in favour of a different draft that unwound all the progress made by officials in recent days.

All we got was some “nebulous words” promising “some flexibility.”

So, despite our “infinite goodwill,” we weren’t able to sign the communique, Varoufakis continues.

According to a source who spoke with Peter Spiegel, bureau chief for the Financial Times in Brussels, the Eurogroup meeting “broke up even before finance ministers got a chance to discuss” the draft proposal prepared by Greece.

Meanwhile, an op-ed written for the Times that appeared earlier in the day made the Greek finance minister’s negotiating position relatively plain. Though it is often mentioned that as an academic who has studied and taught the economics and mathematics of game theory, Varoufakis said that his strategy for ongoing talks with foreign creditors and lawmakers has nothing to do with “bluffs” or “tactical subterfuge.” Instead, he argued, his straightforward approach would be to “present honestly the facts concerning Greece’s social economy, table our proposals for regrowing Greece, explain why these are in Europe’s interest, and reveal the red lines beyond which logic and duty prevent us from going.” On the overall negotiating position of Greece, Varoufakis concluded:

Our government is not asking our partners for a way out of repaying our debts. We are asking for a few months of financial stability that will allow us to embark upon the task of reforms that the broad Greek population can own and support, so we can bring back growth and end our inability to pay our dues.

One may think that this retreat from game theory is motivated by some radical-left agenda. Not so. The major influence here is Immanuel Kant, the German philosopher who taught us that the rational and the free escape the empire of expediency by doing what is right.

How do we know that our modest policy agenda, which constitutes our red line, is right in Kant’s terms? We know by looking into the eyes of the hungry in the streets of our cities or contemplating our stressed middle class, or considering the interests of hard-working people in every European village and city within our monetary union. After all, Europe will only regain its soul when it regains the people’s trust by putting their interests center-stage.

As he left Monday’s meeting, Jeroen Dijsselbloem, the Dutch finance minister and president of the Eurogroup which administers the foreign lending program for the European Commission, offered cautious optimism by saying, “There is time and ample room to agree on the terms of an extension.”

Turning towards optimism of his own at the conclusion the press briefing, Varoufakis stated, “I have no doubt that within the next 48 hours Europe will come together and find the phrasing so we can move on to do the real work to find the common ground [and find a new situation] that is good for Greece and Europe.”

When the representative from Luxembourg was asked what comes next for the Eurogroup talks, Gramenga replied simply: “Wait.”