On February 1, more than 5,000 oil workers at nine facilities went on strike in the first nationwide oil workers strike since 1980. The United Steelworkers of America (USW) represents 30,000 workers in more than 230 refineries, oil terminals, pipelines and petrochemical facilities in the United States. 65 of the refineries provide two-thirds of the oil in the US. 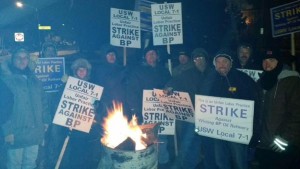 The strike isn’t about pay; it’s about safety and working conditions. The issues include excessive overtime, staffing levels, the contracting out of jobs, and health and safety concerns.

USW spokesperson Lynne Hancock told VICE News that the understaffing means refineries operating “with fewer people and they end up working excessive overtime to handle the workload of those who are not present.”

The strike’s been gaining outside support as well. At the Tesoro Golden refinery in Pacheco, California, nurses from the California Nurses Association (CNA) and members of the Communities for a Better Environment joined the USW picket line in a show of solidarity.

CNA spokeswoman Katy Roemer said; “We stand in solidarity over their safety concerns and the fact that they are the front-line workers who are going to see when something is wrong. When something is wrong, they need to be able to say something, and there needs to be contractual language that allows them to say something, that allows it to be heard and allows so there are no ramifications.” 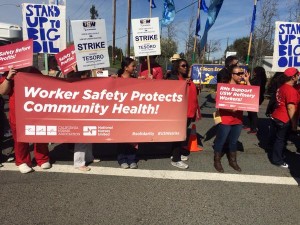 Nurses in solidarity. Photo by Rick Herd via Twitter

Annie Leonard, Executive Director of Greenpeace USA, agreed, saying in a statement; “Every day, oil and chemical workers risk their lives just to earn a living. The hazards they face are also shared by the millions of Americans living across the fence line from industrial oil and chemical facilities. Greenpeace supports the efforts of the USW because their success will not only make people’s jobs safer and more secure, it will make the communities of millions of Americans safer as well.”

At some refineries, managers and non-union contract workers have been living on the premises to avoid striking workers and to be able to respond quickly in an emergency. Others that were shut down for maintenance haven’t been started up again. Some experts are skeptical of the refineries’ ability to deal with problems that might occur. Mark Broadbent, a research analyst with consultants Wood Mackenzie, said that the longer the strikes last, the more exposed the refineries may be to disruptions caused by problems. He points out;

“They are experienced. They know their facilities, what valves to turn. Their response time is much quicker, and they can easily resolve problems when units flare up.The companies have certainly shown they are capable of running the refineries, but over time, as more upsets occur, they will likely not be handled as quickly.”

BP announced yesterday that they were training additional replacement workers. The oil companies have also been bypassing the union and directly asking the workers to return, with limited success. Meanwhile, USW workers at the Tesoro Long Beach oil terminal have threatened to join the strike. This could up the ante greatly, as the International Longshore and Warehouse Union (ILWU) are having labor issues of their own.

The ILWU members have been working without a contract since July of last year, and were locked out the last couple weekends by the Pacific Maritime Association (PMA) over an alleged slowdown at various Pacific ports. The Southern California ports all have ships with cargo waiting to be unloaded or loaded; some have been there for weeks. The USW workers striking would add that much more to the backup.

Yesterday, there was a huge explosion at the Exxon Mobil refinery in Torrance California; the explosion was the equivalent of a magnitude 1.7 earthquake. There were a few minor injuries and some localized damage. This is a refinery which has USW workers who haven’t gone out on strike. We shudder to think about what would have been the outcome if it had taken place at one of the refineries where the USW is on strike.

We hear a lot of grumbling from our friends on the right about those “evil unions.” If it weren’t for unions, we wouldn’t have child labor laws, the weekend, forty hour weeks and a lot of the things we take for granted today. We also wouldn’t have a lot of the safety regulations we do. When the unions win, we all win.