It began with someone on Twitter giving me a heads up, saying that the Russian media would be replaying it on a loop for at least a year. ‘It’ referred to a recent CNN interview with Barack Obama in which, according to the Russian link my follower had provided, Obama ‘admitted’ that the US was behind the February 2014 ‘coup’ in Ukraine. When I checked the latest headlines online, sure enough it was one of the top stories of the day. The Russian press was having a field day. If John McCain’s visit to Maidan hadn’t already provided enough ammunition to Russian state media, Obama’s ‘admission’ had now armed them as surely as Russia’s ‘humanitarian convoys’ armed the separatists in the Donbas.

Of course, the White House disputed the Russian interpretation of the comment, which hinged on a single phrase in which Obama said Yanukovych fled after ‘we had brokered a deal to transition of power in Ukraine.’ The statement, it said, was most likely a reference to the so-called 21 February Agreement, which Yanukovych essentially repudiated when he elected to flee the country. Moreover, not only was this agreement not a coup d’etat, it was overseen by representatives of EU countries, not the US.

In other words, Obama didn’t just put his foot in his mouth; he did so by claiming credit for something the US wasn’t even responsible for. 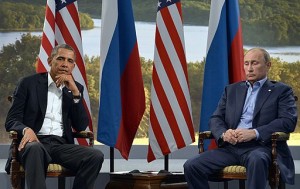 Whether it’s McCain’s solid record of uncritically supporting anyone anti-Moscow, Mitt Romney’s claim that Russia was America’s ‘No. 1 geopolitical foe,’ or Obama’s talk of reducing the Russian economy to tatters, American leaders have an annoying habit of bumbling right into the Kremlin’s own game. The counterproductive, utterly irrational idea of maintaining US ‘credibility’ as some kind of world leader seems to make them incapable of changing these tactics, much less turning things around on the Kremlin and beating them at their own game. I’m not one to advise Western leaders, but I figured I’d assume good faith and give them a few hints, if only to help them blunder a bit less often.

Without delving into a deep analysis of Putin’s government, one particular aspect remains salient here. From the fall of the Soviet Union, Russia’s leaders have failed to produce a functioning, prosperous society for all of their country’s citizens. Yeltsin’s failures discredited the very word democracy in the mind of many Russians. Putin couldn’t offer them democracy, of course, but what he could offer was some semblance of order, which seemed like a big improvement. Of course, anti-American rhetoric has long been associated with Putin’s regime, but when oil prices and foreign investment were high, most people simply rolled their eyes at such rhetoric. They were too busy enjoying vacations in Turkey, Egypt, and in some cases even Europe or the United States. When they weren’t abroad they were enjoying all the imported brand-name goods, which satisfied a consumerist culture that could put America’s to shame. As much as the elite increasingly talked about ‘foreign agents’ and ‘colour revolutions’, most Russians simply didn’t care.

Russians were well aware that the privations and outrages they still suffered were not the conspiratorial workings of the West, but rather the fault of a corrupt and sclerotic state that insisted on monopolising power. After all, how could there be a bitter struggle with the West when it was so obvious that the West was dumping boatloads of cash and products into the Russian market?

Protests in 2011-2012 shocked the Kremlin, reminding the Russian elite that an educated, tech savvy, and increasingly prosperous society can be dangerous. Putin needed to make his conflict with the West real. Lucky for him, Western leaders were happy to oblige him with ridiculously shortsighted policies in countries like Libya and Syria. Tough talk but without the willingness to back it up allowed Putin to play the role of a peacekeeper in Syria in 2013. Even better for Putin, the West’s direct warnings, statements, and sanctions against Russia over his annexation of the Crimea and involvement in southeast Ukraine made a Russia-West confrontation – the wildest fantasy of geopolitical ‘experts’ – a reality for ordinary Russians.

It would help if Western leaders were to understand something about the people who run Russia. Because they are unable to offer Russia’s citizens anything better than a corrupt and backward society, there is a crucial need for its leaders to distract the populace and make them blame their problems on the West and, in particular, the United States. When American leaders scold Russia, often making blind, sometimes deeply hypocritical statements in the process, the Russian press uses this as evidence that the West hates Russia, and so, by extension, Russia’s leaders must be doing something right because they’re confounding the West.

Reading the writings and statements of pro-Kremlin ideologues reveals a compendium of anxieties. There’s an obvious crisis of masculinity, which manifests in the swaggering photo-ops of Vladimir Putin and the often-disturbing tendency to put international relations in terms of sexual dominance. Pro-Kremlin trolls online often construct pornographic memes portraying Ukraine as a prostitute, or more often a passive homosexual. There’s often an extremely passionate belief that Russia is ever-so-special and unique, that it has some kind of ‘historical mission.’ Most of all there’s the constant claim that Russia is ‘resisting’ something without actually offering anything in return.

When Western nations issue threats they obviously can’t or won’t back up, Russia plays the role of the rebel. In reality, of course, Putin’s Russia is an authoritarian, corrupt state, which preaches morality while practising nothing of the sort. Since Western leaders don’t seem to be interested in using military force to halt Russian aggression, they had better start learning how to deal with the anxieties and neuroses of those in the Kremlin.

First, Russia’s leaders and their ideologues must be made aware of how ridiculous they look. They need to be made aware of how little, Westerners, especially ordinary Americans, think of them. The average Russian, regardless of where he or she lives, will probably think about or hear about the United States several times in one day. Many Russians know that there is a state called Ohio or Kentucky. By stark contrast, most Americans go days at a time without thinking about Russia, unless they happen to catch the international news. Few could name any cities in Russia beyond Moscow and St Petersburg, if that.

While Russians like to attribute this to American ignorance, they ought to be reminded that this ignorance is rooted in apathy. In other words, Americans don’t know about other Russian cities like Samara or Nizhny Novgorod for the same reason they don’t know about cities like Hurgada in Egypt or Hangzhou in China; they simply have no reason to care. Nobody is to blame for this but the Russian elite. Instead of transforming Russia into a vibrant, open, prosperous society, which could attract more visitors and export consumer goods to the rest of the industrialised world, they opted instead for crude xenophobia, ridiculously complex visa regulations, neglect for infrastructure, and dependence on exporting oil and natural resources.

Secondly, Western leaders need to force the Kremlin to explain what it stands for, rather than letting it play the misunderstood rebel. Naturally, supporters of the regime will claim they are standing up for ‘traditional values’. Western leaders must question this. They must learn all they can about daily reality on the Russian streets, which is anything but a model of traditional morality. Russia’s rates of abortion, teenage pregnancy, alcohol and drug abuse, domestic violence, and homicide are alarmingly high. They must highlight the utter contempt Russia’s elite shows for its people, including those who give up their lives supposedly in defence of their homeland. They must show not bluster and indignation, but rather pity.

Western leaders need to start asking tough questions in public. How is it that Russia feels the need to show its strength by bullying an impoverished neighbour when it can’t even manage to build roads or even run a functioning postal service? For all its posturing and constant invocation of the victory over fascism, the pensions of Great Patriotic War veterans are far lower than those of European pensioners, including veterans of the defeated Wehrmacht. Is that victory? This approach must not be delivered with malice or spite. It is regrettable, but it is a bitter truth, and it is the Putin government’s fault.

Putin’s ideologues want to be taken seriously. They believe that their ideas and actions, which hold so much meaning to them have the same meaning to the rest of the world. They must be reminded constantly that the rest of the world isn’t subject to their delusions. While the West and its allies shouldn’t be required to surrender to Putin’s demands, they need not be dragged into a shouting match. They must make it clear that so long as it acts up, Russia will remain increasingly irrelevant.

Most importantly of all, Western leaders really ought to rethink some of their policies of the last decade or so and reflect on what lessons the Kremlin was learning from them. Clinton, Bush, and Obama all taught Putin that military interventions are fine as long as you come up with a tenuous justification, and are able to get away with it. Uncritical and unconditional support for Maidan appeared to Russians as an open coup right in front of their eyes. What if, instead of McCain standing on a stage with radical nationalists like Oleh Tyanhibok, Western leaders reminded the Ukrainian people that they have a diverse nation, which must preserve its pluralism if it is to survive? Insofar as Yanukovych’s corruption hurt everyone in Ukraine, there was no good reason for the movement to degenerate into nationalist rivalry. Western leaders should have warned protesters and their leaders that alienating large parts of the country would play into the hands of Moscow, and that the West would not bail them out in any scenario which led to civil war or Russian intervention.

Lastly, politicians need to think twice about what actions really preserve ‘credibility’ and which do not. Any time tough talk isn’t backed by action, credibility is reduced, not preserved. This being the case, sometimes it is best not to say anything at all. Russia’s rulers seem to be claiming that they’re prepared to go it alone without any partners or allies if need be. Let them. Unless there is a specific, pressing issue that cannot be ignored, is it really necessary for Western leaders to drop any sound bites about Russia at all? Is it really necessary for Germany to respond when the inmates of the sanitarium that is the State Duma declare the unification of their country in 1989 as an ‘annexation,’ or when they demand reparations for the invasion of the USSR? What possible good can come of dignifying such populist posturing with response, particularly when it’s obviously aimed at the domestic audience?

And let us own up to our past mistakes – we can take it.

James Kovpak is a journalist and amateur historian based in Moscow. He is the founder of the blog, Russia without BS. You can follow him on twitter at @RussiawithoutBS