The Westgate Mall was chosen by al-Shabaab because of its striking resemblance to western-style shopping malls across Europe and America. They now stage this threat against western malls because it is the most significant thing they are known to have accomplished, so they cling to that horror for legitimacy and as a way of getting their name back in the news when all the media attention lately has been focused on Daesh. Mall of America was named because it symbolizes American materialism and is located where there is a substantial Somalian population, which is targeted by al-Shabaab for recruitment of followers. Based on the coverage we saw during the time the story broke, we would say al-Shabaab feels quite victorious without having to even fire a shot.

Considering the fact that real authorities on terror are reporting this threat as having no demonstrated capacity to be carried out and does not contain an actual imminent threat of an impeding attack, it does demonstrate quite clearly how unprepared the general population is to interruptions of their daily routines in the world of terror they allow themselves to live in today. One would be quite foolish to underestimate the reach and intention of any of these terrorist groups.  Yet the reaction attained in this threat is feeding the terrorists what they want on a silver platter with a golden spoon. 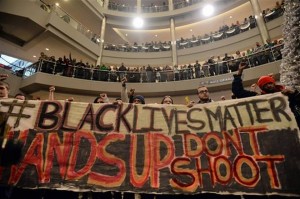 On December 20, 2014, the Mall of America was the scene of what the mall management perceived to be a threat to their way of doing things. In the wake of the #BlackLivesMatter protests taking place across the nation, organizers held a protest inside MOA despite moves on the part of the mall and the city of Bloomington to block the activity from happening. Occupy World Writes spoke with several members of the community that were present at the event, and covered the story in a previous article.

We have openly spoken about Daesh, the war on terror, national security, and foreign policy in regards to terror. We are based in the upper midwest and have strived to bring you news from an international perspective. Minnesotans are known as “Minnesota nice” when it comes to how they treat others. The Minneapolis/St. Paul region is home to many diverse populations, and nearly every ethnic group we discuss is represented within this community. This includes, in addition to the majority white population, substantial populations of blacks, hispanics, Jews, Somalians, Kurds, Muslims, Native Americans, Hmong, Cambodian, Laotians, Vietnamese, Chinese, Asian, disabled and homeless people. The lists are endless. Minnesota is, by large, proud and supportive of these various communities. They provide stable businesses, employment, art, culture, and additional values to not only people living in and around these populations but to Minnesota overall.

Yet the reaction of the city of Bloomington in these two examples of what they perceive to be threats to MOA are astonishingly disproportionate. The fact that a terrorist group based in Somalia has heard of, thus threatened, the MOA brings it from the “private property” argument being used by the city against the BLM protestors to that of “public space” perception. When a piece of private property becomes world headlines because of its public accessibility, it can no longer be considered private.

In our view, the city of Bloomington has emphasized their discriminatory treatment of portions of the local community in their reaction to the terror threats. The MOA used the “private property” argument to attempt to prohibit the Black Lives Matter protests from occurring – yet now they want, expect and may need security from the Department of Homeland Security, the FBI, and all other federal agencies overseeing terrorism within the United States.

The BLM protests last December were nonviolent. At NO time were any threats of violence, vandalism, death, harm or even intimidation ever made by the organizers of the event. The protest was planned as a peaceful public awareness event that would take place during a limited amount of time during a day when the facility has the highest potential for traffic, thus getting the message of the protest to the most people.

Several of our members took note of the actions of the city in the days immediately following the Black Lives Matter protest. We remembered Bloomington City Attorney Sandra Johnson’s communication with the organizers including implications they would be charged for the increased security required for that day, the loss of revenue the stores may claim they suffered when mall security and police closed certain stores or portions of the mall, and several other trespassing and incitement related charges.

On Wednesday, January 14, the city filed charges in Hennepin county court against 10 of the MOA protest organizers. Their court date is scheduled for March 10, 2015. This has led to #MOA10 social media hashtags and events supporting the 10 organizers of the 12-20 protest. On January 16, a commentary piece appeared in the Minneapolis Star Tribune that explained, from an objective yet professional point of view, how Johnson had used a”prosecutorial error” in reaching her decision to charge the organizers. You can read the piece here.

In a just world, the treatment of al-Shabaab would be no different. Sandra Johnson would draft a letter to the group’s organizers, informing them that this type of behavior at MOA is simply not allowed. She would offer them a parking lot to meet in, and remind them that as long as there are fewer than 50 of them gathering, they would not even need to pay for the permit to use it. She would tell them they will be charged for extra security, any loss of profit by any of the businesses in the mall, and that they would most likely be banned from shopping there for an entire year. But this is not a just world, so we know that letter will never be written.

We also wonder, in the light of what a real terror threat to MOA looks like, if the city attorney will reconsider and drop the charges against the #MOA10. Missing from the discussion thus far is the city of Bloomington treating all residents equally, not just those who own large pieces of private property they intentionally invite the public to on a daily basis for the purpose of generating a profit.

We have only one message to the city of Bloomington and Sandra Johnson: Stop wasting time and funds. Drop the charges against the #MOA10 and focus on REAL issues of security threats to public space in and around the Mall of America. 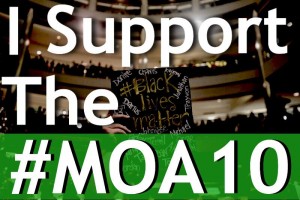