For the sake of our food and its impact on our environment, TTIP needs to be stopped. 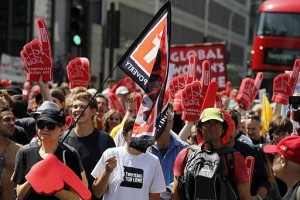 For a decade, dozens of trade deals have been negotiated, signed and implemented without garnering much public attention in Europe. So what is it about the EU-US trade deal, currently being hammered out, that has caused such an outcry?

The opposition to the Transatlantic Trade and Investment Partnership, or TTIP, has surprised many. 50,000 marched in protest on a cold winter’s morning in Berlin. Municipalities across France have declared themselves “TTIP-free”. The Slovak Food Chamber demanded that food and farming be excluded from any deal. Nearly 1.5 million people have signed a petition to have the negotiations stopped.

Environmental, social and labour groups across Europe – Friends of the Earth Europe included – are outraged and actively campaigning.

Traditionally, trade deals have attempted to boost trade by liberalising markets, lowering or removing taxes and tariffs. TTIP’s route to increased trade has a different focus, with the intention to harmonise regulations between the EU and US. The idea is that products allowed for sale under the rules of one bloc would now have market access to the other bloc.

When you see that the regulations TTIP seeks to harmonise impact food safety, chemical use, labour law and public service rules, the rising public opposition ceases to surprise. Given the size of the economies involved, and the breadth of issues in this trade deal, it would be the biggest in history if agreed. This deal’s impact on our food and farming – issues extremely personal and immediate to many people – would be immense.

The intentions of the EU Commission and US trade negotiators are clear from documents leaked and publicly available. Regulations are branded as barriers to trade, and must therefore be circumvented or removed. It is our firm belief that good regulation, democratically made, is necessary to ensure high standards of food safety and the environmental sustainability of our farming practices. It is not red tape, as some would like to paint it.

Farmers and environment lose out

If TTIP is finalised, more products of industrial farming would be traded in both directions across the Atlantic, according to a study conducted by the European Parliament. Agri-businesses and their lobbying organisations have been pushing hard for this market access. But who else wins with an influx of factory-farmed chickens and dairy products?

Not the environment, as intensive farming and food production practices emit more greenhouse gases and carry greater risks of local pollution. European farmers stand to lose out, too. The European Parliament’s study concludes that if the EU lowers standards and increases trade of industrial dairy products and cheap poultry meat, the income for the European farming sector would decrease by 0.5%.

And the price for citizens? The EU and US have fundamentally different approaches to the issue of food safety. For meat production, the US lacks federal standards for food production at farm level. US federal legislation only begins to apply once the animal enters the slaughter house, meaning no overarching rules for veterinary drug use, no specific rules for use of antibiotics and no animal welfare rules. This completely contradicts the EU’s regulatory approach of minimising the risks to environment and human health at every step of the food production process, from field to fork

The Danish government is currently running campaigns to reduce the use of antibiotics for livestock, and is achieving high success rates. Antibiotic use for poultry production has dropped by 90% since Denmark began this programme 13 years ago.

The World Health Organization has cited widespread antibiotic use in livestock as a contributing factor to the growing problem of antibiotic-resistant strains of bacteria – one of the most significant global threats to public health. If TTIP goes ahead, these advances are in danger of being undone by imports of US meat from animals treated with antibiotics.

In another example, the EU takes a more cautious approach for genetically modified (GM) food, while the head of the US department of agriculture has identified better market access for US-grown GM crops as a key objective of the negotiations. EU rules and safety checks for GM crops, as well as the labelling rules for GM food, have been declared ‘trade barriers’ by US trade diplomats.

The EU Commission has no power to change any laws on GM crops directly through a trade agreement, but this deal can change how the laws are applied. Key to enforcing our laws is whether small amounts of GM crops that are not permitted in the EU are allowed to contaminate either our foods or seeds.

This low level of contamination is key to maintaining our right to decide, and a key “trade barrier” target of the biotech industry and US trade negotiators. If these thresholds are changed – as an outcome of TTIP – Europeans may end up eating GM crops that have not been tested or authorised in the EU. So while our GM laws themselves will not be re-written, they could be completely undermined.

TTIP seems to be already having an impact on how food laws are discussed and changed before it’s even finalised. EU Agriculture Commissioner Hogan stated that, in parallel with the TTIP talks, barriers between the EU and US on food safety could be already removed. In contradiction of this, and the published positions on the negotiations, EU Trade Commissioner Malmström said last week that controversial foods or those with large differences in standards in the EU and US wouldn’t be touched. Both cannot be true.

But it’s not just current protections for people and the environment that are at risk if EU and US regulations are harmonised. Desperately needed future improvements to regulation protecting our environment and public health could be prevented from going forward if this trade deal is agreed.

Documents now available on the regulatory cooperation and food safety chapters of TTIP show the intention to allow trade experts to assess the potential trade impacts of any new food safety legislation. Before any new food law would be discussed with food safety experts, either in the EU or US, the newly created body of trade experts should “review the annexes of the agreement” as well as “discuss at an early stage, changes to measures being considered”.

So this body will filter all new food safety rules, transferring power from national authorities to the new committee. This transfer of power will mean that the initial decision will be in the hand of trade officials and not with food safety officials at national level. Our worry is that these trade experts will see the introduction of new food safety rules as barriers to trade, rather than the reflection of the needs and demands of society.

The thought of farming practices and food quality being interfered with is understandably unpalatable. As awareness has grown of the risks from TTIP to essential protections for our environment and public, so too has opposition grown. Our farming and food production system needs drastic improvement, but this Trojan horse of a trade deal would lock us into a regulatory race to the bottom.

For the sake of our food and its impact on our environment, TTIP needs to be stopped.

About the Author:
Magda Stoczkiewicz is director of Friends of the Earth Europe