Yesterday, while the national media was still busy with the 50th anniversary of the events in Selma, there was a large international event taking place that received limited coverage; International Women’s Day. There were marches all around the world as men and women took to the streets calling for an end to sexual violence and gender discrimination. 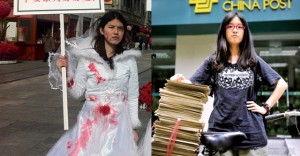 In the world’s most populous country though, the message from the government was anything but encouraging. On Friday, China detained at least 10 women’s rights activists who were planning a nationwide campaign against sexual harassment on public transportation. which would overlap with International Women’s Day. At least five remain in custody.

Li Tingting, who goes by the pseudonym Li Maizi, was detained by police in Beijing. Ms. Li is best known for organizing a campaign for gender-neutral public toilets. Police in Guangzhou detained Zheng Curan, In both cases, their homes were also searched.

Beijing police also detained Wei Tingting and Wang Man, and in Hangzhou, Wu Rongrong was detained. All of the women who were detained have supported or worked with Yirenping, a nonprofit group with offices throughout China that advocates equal rights for people with hepatitis, H.I.V./AIDS and disabilities.

Yan Xin, Ms. Li’s lawyer, said in a phone conversation with the South China Morning Post: “They have not given information on why she was detained, but my guess is that it has something to do with maintaining social stability on International Women’s Day.”

Wang Qiushi, a lawyer representing Ms. Wei, said; “We’ve always thought the country supports equal rights for women. Speaking as a lawyer, this act is beyond our imagination and has shocked us.”

Ironically enough, the Chinese Communist Party had publicly promoted International Women’s Day, with officials citing advancements in women’s rights and holding events for women journalists and diplomats at the Great Hall of the People in Beijing. Shen Yueyue, president of the All-China Women’s Federation, said at the gathering that the “Chinese government attaches great importance to the protection of women’s rights.”

Chinese Human Rights Defenders, an advocacy group based outside China, took to Twitter asking: “Ask Beijing & Guangzhou police: Is it a crime to speak out about sexual harassment in China?” Evidently, the answer is yes.

Occupy World Writes stands in solidarity with these brave women. Their struggles are ours. It is for this reason that we need International Women’s Day. Until we, as humanity, reach a point that gender discrimination and violence toward women are not the issues they are today, our work as a species has a very long way to go.