On Saturday, the West Virginia legislature finished their regular session. While this normally wouldn’t get our interest, there were a couple bills that were voted on in the last few days that caught our eye. Of course, the main push behind both these bills came from the real power in West Virginia; the fossil fuel industry. 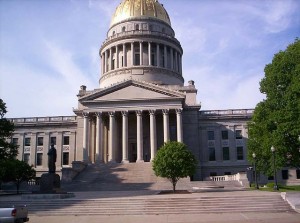 The first, SB423, amends the state’s Aboveground Storage Tank Act. The act was signed into law last April, and was a response to the Elk River chemical spill three months earlier. We wrote about how the spill of 7500 gallons of crude 4-methylcyclohexylmethanol (MCHM) prevented 300,000 West Virginians from drinking, cooking or washing with the water in their homes, and we wrote about Freedom industries’ attempts to shed all liability and responsibility for the cleanup.

Under the act, all chemical storage tanks in the state were required to be registered with the state and have an annual inspection. However, now the yearly inspection only applies to tanks containing 50,000 gallons or holding hazardous materials that are within a certain distance from water supplies; about 12,000 come under these guidelines. 36,000 tanks became exempt from annual inspections with the passage of SB423 if Governor Earl Ray Tomblin signs it into law, as he’s expected to do.

The problems with this should be obvious. The new law provides no protection for groundwater sources, only public waterways. The West Virginia Department of Environmental Protection (DEP) has never been known for being proactive as far as enforcement as is; after all, after the Elk River spill, the DEP claimed that inspecting storage tanks and secondary containment measures wasn’t its responsibility.

The second bill, HB2688, is known as a forced pooling bill. Forced pooling is essentially eminent domain.  When a company wishes to acquire mineral rights in an area, it leases them from the property’s owners. With HB2688, if 80% of the land in an area’s mineral rights are leased, the company leasing the rights can force the other 20% to sell the mineral rights for what the state considers fair compensation.

Mind you, this arrangement isn’t bad at all compared to other states. 39 states have some form of forced pooling law, and quite a few of them set the agreement percentage lower; for example, in Virginia it’s only 25% of the land that needs to be leased before forced pooling comes into effect.

The bill originally passed the West Virginia House in February. The Senate amended the original bill, passed it overwhelmingly, and then sent it back to the House. Here, it died because of a tie vote. What sunk it? A coalition of Democrats and Liberty Caucus (libertarian Republican) members, objecting to the infringement on property rights.

The influence of special interests on our politics is as old as our country. However, it’s rarely been as blatant as it is today. In ways, we’re glad it’s become so; the more obvious it is, the more likely it is that people are finally going to say enough. That day can’t come too soon.