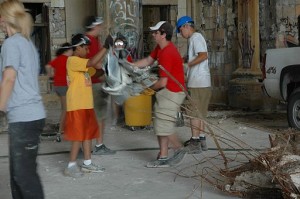 The bill has received significant positive press from a diverse group of organizations such as the Environmental Defense Fund and the Technology Sciences Group, It has bipartisan sponsorship; Senators David Vitter (R-LA) and Tom Udall (D-NM). It has many co-sponsors from both sides of the aisle. It is supposed to be the result of two years of negotiation and collaboration between the sponsors, the chemical industry and environmental groups. In other words, something we don’t see very often these days. So, what could possibly be wrong with it?

Quite a bit, actually. Recently, Senator Udall’s office circulated a draft of the bill. Hearst Newspapers obtained a copy of the bill, which was in the form of a Microsoft Word document. The advanced properties for the Word document shows the company of origin to be the American Chemistry Council, commonly known as the ACC. The ACC is the leading trade organization and lobbyist for the chemical industry. Oops.

Ken Cook, president of the Environmental Working Group, said; “We’re apparently at the point in the minds of some people in the Congress that laws intended to regulate polluters are now written by the polluters themselves.”

Senator Barbara Boxer (D-CA) said; “Call me old-fashioned, but a bill to protect the public from harmful chemicals should not be written by chemical industry lobbyists. The voices of our families must not be drowned out by the very industry whose documented harmful impacts must be addressed, or the whole exercise is a sham.”

Senator Udall’s communications director, Jennifer Talhelm, denied the allegations, claiming: “That document originated in our office. It was shared with a number of stakeholders including at least one other senator’s office. One of those stakeholders was the ACC.”

“We believe that somebody at the ACC saved the document, and sent it back to us. Sen. Udall’s office has been very, very engaged with bringing various stakeholders to the table as part of the process of writing the best possible bill. This is just one example.”

ACC spokeswoman and vice president Anne Kolter said; “It doesn’t mean the original document was generated here. Anyone could have put that (digital signature) in there. You could change it.” However, she didn’t deny that the ACC could have written the document, saying: “I have no idea. … There’s no way for anyone to tell.”

After that, she made what we thought was an interesting statement. She said; “You’re not the first reporter to ask about this,” and went on to say that “We’ve been able to raise enough questions” so that nobody else had written about it. We’d like to know which reporters. How long ago, and how did you change their minds about going public with the story?

Industries writing their own regulations shouldn’t surprise us any more; we’ve seen it happening time and time again over the last few years. Senator Boxer and Senator Edward Markey (D-MA) are proposing their own version of the bill, which has much more stringent regulatory provisions. While their effort probably won’t get anywhere, hopefully some of the stricter provisions will make it into the final bill.