If there is one thing all Americans have reverence for, it would have to be our National Parks and Public Lands. Ever since that day when Theodore Roosevelt gazed across the wonders of Yellowstone, hunted the lands of South Dakota and forever taught us the benefits of conservation. His vision led to the world’s first national park in 1872, Yellowstone.

As each jewel was added to America’s crown of riches for future generations, we never believed these lands and parks so carefully set aside and visited by millions of families as well as guests from other nations would ever become endangered by the very people we elect to represent us.

But that is what has happened. In a rush to balance a budget and avoid making responsible, all-be-it difficult, decisions, they have decided that auctioning off public lands to the highest bidder is the best alternative. Going to the pawn shop is more favored then sitting down at the kitchen table and making really hard choices.

On March 26, “U.S. Senator Lisa Murkowski’s (R-AK) amendment to Congress’s budget resolution passed by a vote of 51-49. The legislation would support and fund state efforts — which many argue are unconstitutional — to seize and sell America’s public lands. These include all national forests, wildlife refuges, wilderness areas, historic sites, and national monuments.

It has become another relentless issue for a certain group in Washington. Repealing ObamaCare, restricting/overturning Roe v. Wade, elimination of the IRS, Dept. of Education, EPA, unions, the list has become endless of what is seen as expendable so the lobbyists filling their pockets with money can have access to higher profits and lower taxes, while the rest of us go with less or without completely.

1. Block Creation and Development of New Parks and National Monuments

It begins with attempts to block creation and development of new parks and national monuments. “In January of this year, Just hours after President Obama’s State of the Union address highlighted the effort to protect more public lands and waters than any other administration, the U.S. Senate poised to vote on a controversial and unpopular proposal that aims to block the protection of new parks, monuments, and historic sites around the country.

A public opinion survey of more than 1,000 likely 2016 voters, released last week by the Center for American Progress, found that the idea of stopping the creation of new national parks and monuments is one of the most unpopular ideas that the new Congress is considering, with nearly seven out of ten respondents expressing opposition,” reports stated.

Earlier that month, ClimateProgress reported, “Rep. Don Young (R-AK) introduced a bill to strip current and future presidents’ authority to designate national monuments, proposing an overhaul to a law that presidents have used for nearly a century to protect some of the country’s most iconic and treasured places.

The bill would amend the 1906 Antiquities Act to effectively block the President from designating any new national monuments without congressional approval and an extensive environmental review. Additionally, the bill would require the President to seek approval from nearby state governments for marine monument proposals.

Sixteen presidents, both Republicans and Democrats, have used the Antiquities Act to permanently protect public lands and historic sites since the Act’s passage in 1906. Some of America’s most beloved and iconic landmarks, like the Grand Tetons and Arches National Park, were originally protected as national monuments under the Act.

Rep. Young, who has co-sponsored similar legislation in the past, is one of several other members of Congress who are fighting to gut the Antiquities Act and weaken protections on public lands, but who feature national monuments prominently on social media and their websites: the background of Rep. Young’s website currently features a stock photo of Denali National Park and Preserve, a portion of which was originally designated as a national monument by President Carter in 1978.”

The fossil fuel industry has long known the reserves held under the public lands of the US. They forget these areas belong to the people, and has been preserved for future generations with the promise of permanent protection.

We became alarmed when we saw this emerge from 2013, “ALEC and Americans for Prosperity have been fanning the fire under these efforts to “reclaim” federal public lands. ALEC is a conservative corporate front group funded by fossil-fuel interests such as the Koch brothers and ExxonMobil that develops model legislation for state legislators to introduce in their legislatures, and it has endorsed many of the bills turning public lands over to the states.”

Currently, 42 national parks are threatened with drilling already occurring, attempts to begin drilling have begun, or intentions to begin efforts are  underway in state houses. 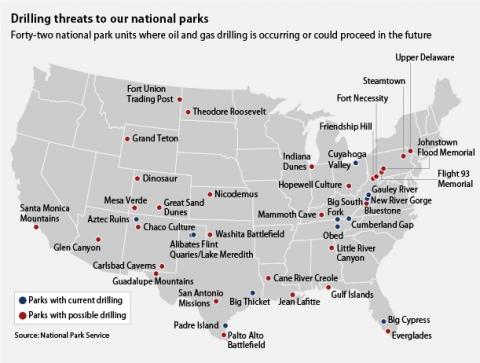 Infographic by Center for American Progress.

Republican Presidential candidate for 2016 Ted Cruz “wants to allow drilling on public lands by selling them off first. He intends to amend the Sportsman Act of 2014, making it illegal for the federal government to own more than 50 percent of land in any state. It would force the U.S. to turn over management of the excess land to the state itself. If this amendment passed, states could sell the lands instead of burdening taxpayers with maintenance costs. The lands could become open for industrial activities like fracking, drilling, mining and logging.

If the thought of logging in Redwood National Forest or fracking a super-volcanoe’s caldera isn’t enough to scare you, they have plans for you favorite park or monument as well.

On March 17, 2015, the Arizona Republic published a story explaining “how it is completely legal for a company called Energy Fuels to re-open and start mining uranium out of Canyon Mine, which was permitted to be mined in 1986. And the company is planning on doing just that after they got the go-ahead from the National Forest Service since the mine is inside the Kaibab National Forest.”

Apache Leap and Oak Flats are now under the control of the foreign copper mine, thanks to a land swap hidden in the last defense bill, added by Arizona’s very own Senator John McCain. These were ancestral tribal lands considered sacred by the tribes they had belonged to. Apparently there is nothing sacred left in America anymore.

Behind It All: Why is This Happening?

Looking at the seven western states most affected by these attempts to usurp public land, an in-depth article from Center for American Progress written in March, 2013, concluded, “Despite the fact that those living in these seven states do not fundamentally agree with the attempts to “take back” public lands, that the economic arguments for it are incomplete, and that the efforts are unconstitutional, conservatives in these state legislatures across the West have still introduced bills demanding the federal government turn federal public lands over to the states. Efforts in Utah, Arizona, Wyoming, New Mexico, Colorado, Nevada, and Idaho are misguided and merely serve to fan the fire of extreme and fruitless rhetoric at the taxpayers’ expense.”

The first excuse we hear is that this will help balance the budget. While national parks do have maintenance costs, let us not forget about the billions they bring to the economy through tourism, employment, education, wildlife conservation and cultural/historical heritage.

Costs to maintain these vast parks and public lands are but a fraction of the national debt. We spend more as a nation on funding the F35, an un-flyable, over-budget defense plane the military does not want; but the contractors building it reside in the districts of the very people who support this type of move.

Furthermore, if the lands are transferred to the states, there is little choice for many of them to be managed properly, considering the hack to state funding that has occurred over the past eight years. This is not a way to pay for unfunded wars while spending billions overseas doing what is called “nation building.”

Since his election, never in our history have we had a president more polarizing than Barack Obama. Elected to what was proclaimed a “post-racial” American culture, we all hoped we were ready to take the next step as a more mature country. We proved to lean the opposite, with the most obstructive Congress seen since the “Do-Nothing” Congress of 1948. The current group makes the 1948 Congress look like over-ambitious over-achievers.

Let us not forget Mitch McConnell standing on the house floor stating that the Republicans’ number one priority is to defeat this president.

But the REAL, gut-wrenching truth is that all of this is for the almighty corporate dollar, the high profits and burgeoning CEO compensation packages. It is about getting rich while the going is good, the path has the least resistance, and quick action can get the desired results before anything can be put in place to stop it all.

Is this what it means to defend the Constitution and uphold the values of our founding fathers? If so, perhaps we need to re-consider what values there are in making any promise as an American to anyone in the world. Do you wonder why our integrity is questioned? 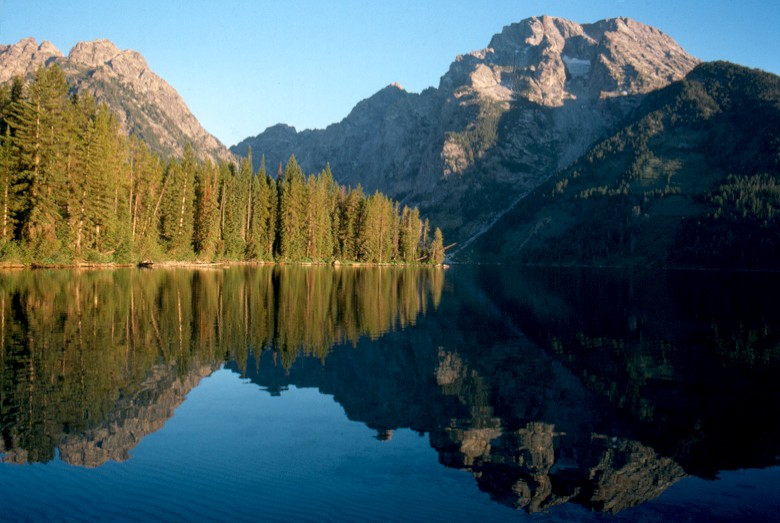