Back in October, we ran an article titled Dumb ALEC, in which we discussed the growing number of corporations disassociating themselves from the American Legislative Exchange Council, commonly known as ALEC, over ALEC’s stance on climate change. Now six months later, ALEC and climate change are back in the news; this time with a plot twist.

Back in March, US Senator Sheldon Whitehouse (D-RI) took to the Senate floor and spoke out against climate change denial and the fossil fuel industry funding received by groups that promote it. ALEC was one of the main recipients of Whitehouse’s ire:

“ALEC is an organization, which works to undercut climate science and undermine climate progress at the state level, interfering in our state legislatures. ALEC has tried to roll back state renewable fuel standards and has handed out model state legislation to obstruct and tie up the President’s Clean Power Plan… Major companies like Google, eBay, Facebook, Yahoo and believe or not even Occidental Petroleum, have disassociated themselves from ALEC because of its destructive position on climate. Google CEO Eric Schmidt has said of ALEC, quote ‘they are literally lying’ end quote. They are literally lying about climate change but they keep getting funding from Chevron, BP, Shell and ExxonMobil.”

ALEC for its part is fighting back. The Washington Post ran an article last Saturday stating that ALEC is threatening legal action against activist groups accusing it of denying climate change. According to the Post, attorneys for ALEC sent letters to Common Cause and the League of Conservation Voters asking them to immediately “cease making false statements” and “remove all false or misleading material” suggesting that ALEC does not believe in global warming. 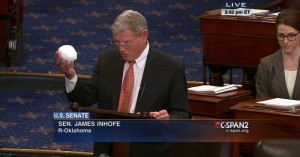 As proof, ALEC’s lawyers cite their position statement on renewables and climate change. We decided to once again put our Bullpucky Translator into play:

ALEC says: “Members of the EEA Task Force work together to develop state-based policies that promote the mutually beneficial link between robust economies and a healthy environment, unleash the creative powers of the free market for environmental stewardship, and enhance the quality and use of our natural and agricultural resources for betterment of human health and well-being.

Many climate activists and pressure organizations willfully and dishonestly conflate these free market environmentalist principles with climate change denial and opposition to renewable energy technologies. Such behavior is unproductive and runs counter to the concept of the free exchange of ideas that ALEC was founded upon.’

The Bullpucky Translator in turn says: “Members of the EEA Task Force work together to develop state-based policies that promote the mutually beneficial link between fossil fuel companies and local, state and federal officials, unleash the creative powers of the free market for environmental negligence and enhance the quality and use of our natural and agricultural resources for betterment of our bottom line.

Many climate activists and pressure organizations willfully and honestly equate these free market environmentalist principles with climate change denial and opposition to renewable energy technologies. Such behavior is unproductive and runs counter to the concept of the free exchange of maximizing profits that ALEC was founded upon.”

However, we don’t even need to run the real meat in the policy statement through the Bullpucky Translator. Alec then goes on to quote their Energy Principles, which contains this gem:

“Climate change is a historical phenomenon and the debate will continue on the significance of natural and anthropogenic contributions. ALEC will continue to monitor the issue and support the use of sound science to guide policy, but ALEC will also incorporate economic and political realism. Unilateral efforts by the United States or regions within the United States will not significantly decrease carbon emissions globally, and international efforts to decrease emissions have proven politically infeasible and unenforceable. Policymakers in most cases are not willing to inflict economic harm on their citizens with no real benefit. ALEC discourages impractical visionary goals that ignore economic reality, and that will not be met without serious consequences for worldwide standard of living.”

In other words, unilateral action by the US won’t accomplish anything and our members have corrupted other governments through huge donations, etc., so we should just keep on pumping tons of carbon into the air and dump wastes and toxins into our waterways so that ALEC members can keep on making their profits.

We could go on and on. We could talk about how ALEC claims that human activity might bring about beneficial climate change, which we suppose could be true if you plan on farming in Antarctica. We could talk about the Environmental Literacy Improvement Act, which claims to promote teaching about the environment and climate in a fair and balanced manner. Hmm… it seems to us that there’s a news channel that acts as a mouthpiece for them that also claims to be fair and balanced. But, we digress…

With this latest ploy, ALEC has proved once again how brazen and shameless its members are. Far from admitting that the corporations who have left them over their stance on climate might be right in their assessment, they wail that they’re just poor, misunderstood free market warriors out to save our way of living, while inadvertently making a huge profit in their attempts to save us from ourselves. Their hypocrisy is overwhelming.