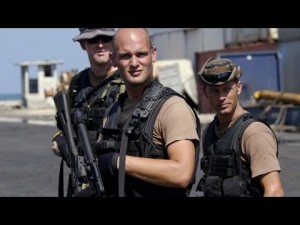 U.S. District Judge Royce Lamberth on Monday sentenced former Blackwater security guard Nicholas Slatten to life in prison for his role in a 2007 attack on Iraqi civilians, which left 14 dead and wounded 17 others.

The Associated Press reports that the three other Blackwater employees—Paul Slough, Evan Liberty and Dustin Heard—were sentenced to 30 years and one day each on charges that included manslaughter, attempted manslaughter and using firearms while committing a felony.

Four former Blackwater guards face sentencing Monday for their role in the deaths of 14 Iraqi civilians during a 2007 massacre called “Baghdad’s bloody Sunday.”

The men, Dustin Heard, Evan Liberty, Paul Slough, and Nicholas Slatten, were convicted in October 2014 after years of legal battles. “Slatten faces a mandatory sentence of life in prison without parole for first-degree murder before U.S. District Judge Royce C. Lamberth,” the Washington Post reports; the other three men face the possibility of dozens of years behind bars.

While defense lawyers have argued that the men were acting in self-defense, federal prosecutors wrote that the men’s “crimes here were so horrendous—the massacre and maiming of innocents so heinous—that they outweigh any factors that the defendants may argue form a basis for leniency.”

In an interview with Democracy Now! last year, Jeremy Scahill, author of the bestselling Blackwater: The Rise of the World’s Most Powerful Mercenary Army, described the deadly traffic square shooting that left 17 people killed:

[Blackwater guards] were responding—they were a unit called Raven 23. They were the elite Praetorian Guard of the U.S. occupation. They were guarding Paul Bremer, who was the original sort of proconsul in Iraq, the “viceroy,” as he liked to call himself. They were responding to an incident that had occurred on the opposite end of Baghdad from where their base was located. They roll out. They end up hitting a crowded intersection at Nisour Square. What often would happen in Iraq is that mercenary contractors would start throwing frozen water bottles at cars, trying to force them off the street, and then eventually escalate up to shooting at vehicles. These guys basically tried to take over this traffic circle, the Blackwater guys, so that they could speed around and continue on to their destination.

A small white car with a young Iraqi medical student and his mother didn’t stop fast enough for the Blackwater convoy, and they decided to escalate it all the way up to assassinating those individuals. And I say “assassinating,” because they shot to kill these people, and then they blew their car up. And then, that started this massive shooting spree that went on for—it was sustained for minutes. And at the end of it, 17 Iraqis were killed, including a nine-year-old boy named Ali Kinani, whose story we’ve told on the show before, and some 20 others were wounded in the attacks. And it was—you know, it became known as Baghdad’s “Bloody Sunday.”

And Blackwater… in the immediate aftermath of the shooting, said that they had been fired upon. They had their allies in the media. A senior producer at CNN was quick to get on TV and say, “Oh, no, no, this wasn’t a massacre. You know, this was a firefight, and Blackwater was shot at.” Clearly, this jury saw what the Iraqi eyewitnesses have always contended, and that is that this was an unprovoked massacre of Iraqi civilians, none of whom were posing a threat, except not stopping fast enough for the mercenaries helping to occupy their country.

As Common Dreams previously reported, “the incident became a flashpoint of outrage over the atrocities that U.S. forces—particularly mercenaries—inflict on occupied civilian populations in Iraq.”

The Post reports Monday: “Defendants said that the case is the first in which the U.S. government prosecuted its own security contractors for the firearms violation, which involve weapons given them by the government to do their jobs in a war zone.”

Scahill wrote following the guilty convictions that they marked yet another instance in which high-ranking individuals failed to be the targets for accountability.

“Just as with the systematic torture at Abu Ghraib, it is only the low level foot-soldiers of Blackwater that are being held accountable. [Blackwater founder Erik] Prince and other top Blackwater executives continue to reap profits from the mercenary and private intelligence industries.

“None of the U.S. officials from the Bush and Obama administrations who unleashed Blackwater and other mercenary forces across the globe are being forced to answer for their role in creating the conditions for the Nisour Square shootings and other deadly incidents involving private contractors,” Scahill wrote.

Editorial note: We ran a story last summer about the actual trial, and how Blackwater/Academi/Constellis is still employed by the government for the same type of duty. It can be found here.