“Fast-food workers are joining together and standing up for what’s right, and with students, #BlackLivesMatter activists, adjunct professors, home care, Walmart, child care, and airport services workers standing with us, we are stronger than ever,” said Terrence Wise, fast food worker in Kansas City, Missouri. (Photo: fightfor15.org)

In what is being called the largest low-wage worker protest the United States has ever seen, tens of thousands of fast food, laundry, home care, child care, retail, and education employees walked off the job or staged rallies on Wednesday in more than 200 cities across the country.

They were joined by workers in 35 countries on six continents, from New Zealand to Brazil to Japan.

The mobilization was part of the movement for a $15 dollar minimum wage in the U.S., which has touched off a nation-wide conversation about poverty and inequality since fast food workers began a series of rolling strikes and workplace actions more than three years ago.

“Fast-food workers are joining together and standing up for what’s right, and with students, #BlackLivesMatter activists, adjunct professors, home care, Walmart, child care, and airport services workers standing with us, we are stronger than ever,” said Terrence Wise, a father of three who works at McDonald’s and Burger King restaurants in Kansas City, Missouri, in a press statement. “I know we will win.”

Backed by the Service Employees International Union, Wednesday’s rallies were timed to coincide with Tax Day in the U.S., in a bid to highlight the fact that low-wage workers are forced to rely on public assistance to get by.

Under the banner “We are worth more,” protesters are calling for living wages, as well as the right to organize in their workplaces without intimidation and retaliation. 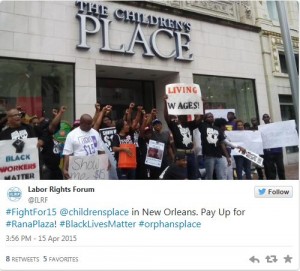 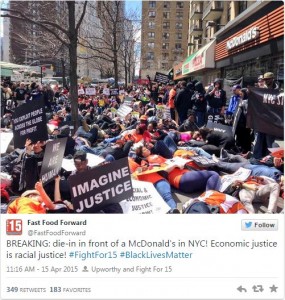 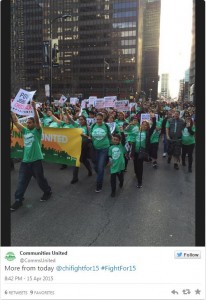 In the streets on Wednesday, protesters made connections between social and economic justice. From Charleston, South Carolina to Ferguson, Missouri, protesters memorialized the lives of unarmed people of color killed by police and brought the message of the growing Black Lives Matter movement.

“We joined the Fight for $15 because, for us, racial justice is economic justice. We believe that Black workers have paid undeserved debts to greedy corporations for far too long,” said Charlene Carruthers, national director for the Black Youth Project 100.

A report released on Monday by the National Employment Law Project finds that women and people of color are dramatically overrepresented in the underpaid work-force, with over 50 percent of African-American workers, and nearly 60 percent of Latino workers, making less than $15. 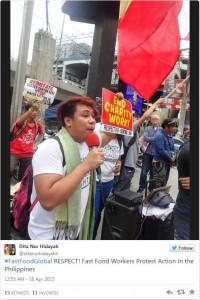 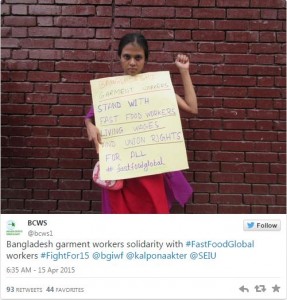 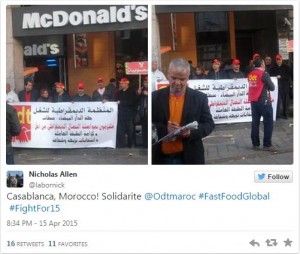 “The fast-food industry is dominated by a handful of multi-billion-dollar global companies, so we need to have a strong, global movement of workers pushing for better wages, better treatment and better rights,” said Massimo Frattini, international coordinator for the International Union of Food workers in a press statement.

Participants say that this movement is a matter of urgency, amid rising inequality and plummeting wages in the U.S. and world-wide.

As Andrew Olson, McDonald’s worker in Los Angeles put it in an interview with The LA Times, “Just because I work in fast food does that mean I should have to just scrape by in life?”

Looking to the future, journalist Rana Foroohar argued in Time that the Fight for $15 is proving a powerful force. “Politicians are going to have to grapple with this in the election cycle,” wrote Foroohar, “because as the latest round of wage protests makes clear, the issue isn’t going away anytime soon.”