“Denial of genocide is the final stage of genocide because it strives to kill the memory of the event; denial seeks to demonize the victims and rehabilitate the perpetrators; denial creates what the psychiatrist Robert Jay Lifton has called “a morally counterfeit universe for the survivors and their legacy.” 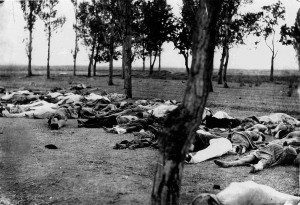 “THOSE WHO FELL BY THE WAYSIDE. Scenes like this were common all over the Armenian provinces, in the spring and summer months of 1915. Death in its several forms—massacre, starvation, exhaustion—destroyed the larger part of the refugees. The Turkish policy was that of extermination under the guise of deportation.” Picture showing Armenians killed during the Armenian Genocide. Image taken from Ambassador Morgenthau’s Story, written by Henry Morgenthau, Sr. and published in 1918. Image Public Domain via Wikimedia Commons.

Pope Francis describes it as “the first genocide of the 20th century.”

Turkey responded by recalling their ambassador to the Vatican.

One hundred years ago this month, the Ottoman Empire began carrying out a systematic plan to exterminate its minority Armenian population. Between 1 million and 1.5 million people were killed or died of starvation. On April 24, 850 intellectuals, doctors and writers of the Armenian community were rounded up in what was then Constantinople and later executed. That was just the beginning.

The spring and summer of 1915 became the bloodiest in Armenian history. Men and older boys were separated from the rest of the population and killed without question. Women, children the elderly and the disabled were forced into long death marches into the Syrian dessert with no food or water given them, and those that survived the march were placed in annihilation camps.

For a documentary that is worth watching, please view the following. We can not write a summary that can do better justice to the Armenian Genocide controversy than this.  The images and descriptions of the methods used to carry out the extermination of the Armenian peoples by the ruling Turkish government presented in this film are the blueprint for the subsequent genocides of the past one hundred years. Warning: Not for the weak of stomach or those who seek “quick videos” to explain things. Running time: 93 minutes.

The man who invented the word “genocide”— Raphael Lemkin, a lawyer of Polish-Jewish origin — was moved to investigate the attempt to eliminate an entire people by accounts of the massacres of Armenians. He did not, however, coin the word until 1943, applying it to Nazi Germany and the Jews in a book published a year later, “Axis Rule in Occupied Europe.” 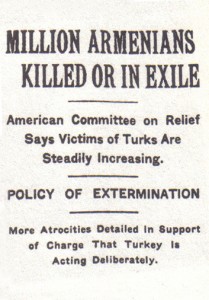 An article by the New York Times dated 15 December 1915 states that one million Armenians had been either deported or executed by the Ottoman government. Image via Wikipedia.

Even the Jewish community has taken pause. In a recent commentary regarding the Armenian genocide, Rabbi Jeffrey K. Salkin writes, “Why should Jews be talking about this? Because when we look at the Armenians, it is as if we are looking in the mirror.”

We find it appropriate that a commemoration today in Turkey starts in front of the Museum of Turkish and Islamic Art on Sultanahmet Square. This building was known as the central prison in 1915; individuals from the Istanbul Armenian community, including intellectual leaders, were arrested in their homes, detained here, and then sent off to the Haydarpaşa train station.

Standing on arguments of the numbers of deaths and whether it was intended to eliminate the entire Armenian group, the Turkish government refuses to accept the term “genocide” in reference to the Armenian slaughter. It is not part of their official recognized history; existing laws in Turkey basically prohibit and criminalize mentioning or talking about the Genocide. According to Turkey, “our memory does not support the Armenian narrative on the events of 1915, [but] it is only Turks and Armenians who can effectively address their issues together and work jointly to find ways forward. Turkey is ready to do its part”. They argue there is no “evidence”, no one is demanding the recognition, and that the death count could not possibly be as high as claimed.

The University of Minnesota’s Center for Holocaust and Genocide Studies has compiled figures by province and district that show there were 2,133,190 Armenians in the empire in 1914 and only about 387,800 by 1922. Figures don’t lie, but liars figure.

Entrenched so deeply in denialism, in 2007 the Turkish government threatened the United States with closing bases in their borders if the US were to officially recognize this as a genocide. We also know, “The United States isn’t the only target of this censorship effort. At their government’s prompting, Turkish diasporan organizations in 2009 mounted a campaign to stop the Toronto school board from including the Armenian genocide in a human rights curriculum. In 2010, Ankara succeeded in pressuring the Rwandan government to scrap a presentation on the Armenian genocide at a panel on genocide at the United Nations. In 2012, the Turkish government was successful in demanding that the British government order the Tate Gallery to remove the word “genocide” from the wall text of an Arshile Gorky exhibit.”

Despite these efforts, currently there are 18 countries that recognize the Armenian Genocide.

Map of massacre locations and deportation and extermination centers. Image via Wikipedia.

As this was being prepared for publication, Turkey recalled their ambassador to Austria after the Austrian parliament passed a resolution recognizing the Armenian Genocide.

In 1915, the New York Times alone ran 145 articles reporting the Armenian crisis. The world was aware. No one did anything. Would the Holocaust had happened during WWII if the world would have responded differently to the Armenians in 1915?

Editorial Note: This article is comprised of numerous quotes from the Resource Articles listed above. Review of these articles will provide even broader perspectives than those represented here.