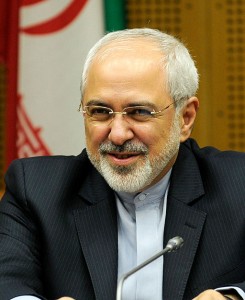 Speaking before the Review Conference of the Non-Proliferation Treaty on Monday, Iran demanded that countries possessing nuclear weapons halt all plans to modernize their arsenals, while warning that the atomic stockpile of Israel, which is not a signatory, poses a “serious and continuous threat” to the Middle East.

Addressing the assembly in New York City, Iranian Foreign Minister Mohammad Javad Zarif, whose country is still undergoing negotiations over its development of nuclear power capabilities, told NPT signatories that nuclear-weapon states should “immediately cease their plans to further invest in modernizing and extending the life span of their nuclear weapons and related facilities.”

According to Reuters, Zarif argued that “cuts in deployment were not the same as cuts in stockpiles, adding that Iran and the other 117 non-aligned nations that are parties to the NPT are concerned about security policies of nuclear-weapon and NATO states that allow the use, or threat of use, of atomic weapons.”

Further, Zarif said the non-aligned nations viewed Israel’s assumed nuclear weapons as “a serious and continuing threat to the security of neighboring and other states, and condemned Israel for continuing to develop and stockpile nuclear arsenals.” The Federation of American Scientists estimates that Israel currently holds 80 nuclear weapons.

Iran is one of 120 non-nuclear weapon states that on Tuesday issued an open letter (pdf) warning that they are “deeply concerned about the humanitarian consequences of nuclear weapons.”

The statement continues: “It is in the interest of the very survival of humanity that nuclear weapons are never used again, under any circumstances. The catastrophic effects of a nuclear weapon detonation, whether by accident, miscalculation or design, cannot be adequately addressed. All efforts must be exerted to eliminate the threat of these weapons of mass destruction.”

These concerns mirrored those of millions of civilians who signed petitions calling on the United Nations to take urgent action towards the complete elimination of the world’s nuclear arsenals.

On Tuesday, U.S. Secretary of State John Kerry gave a speech in which he disclosed new information about the size of the United States’ nuclear weapon stockpile. As of September 2014, the U.S. holds 4,717 nuclear warheads, Kerry said, which denotes a reduction of roughly 500 warheads since President Obama took office in January 2009. Further, 2,500 additional warheads have been retired, though according to the Federation of American Scientists, they are still relatively intact and awaiting dismantlement.

“Despite significant reductions, the United States and Russia still possess more than 90 percent of the world’s nuclear weapons,” Kerry acknowledged.

Also Tuesday, Russian President Vladimir Putin told the assembly that his country “consistently complies with all the provisions of the NPT,” announcing that Russia has “reduced our nuclear arsenal to a minimum level which is a significant contribution to the overall and full disarmament.” However, details about the actual size of the reduction were not forthcoming.

On Monday, Zarif met with U.S. Secretary of State John Kerry to discuss efforts to secure a final agreement by a June 30 deadline between Iran and the member states of the UN Security Council—China, France, Russia, the United Kingdom, and the United States—as well as Germany.

“We are, in fact, closer than ever,” Kerry told the assembled NPT parties. “If finalized and implemented, (an agreement) will close off all of Iran’s possible pathways to the nuclear material required for a nuclear weapon and give the international community the confidence that it needs to know that Iran’s nuclear program is indeed exclusively peaceful.”