Editorial Note: We first ran this story in February of last year. With as much importance today as then, we republish it for your advantage.

Across America are tracts of land which lend themselves very well to the growth of native perennial grasses, the most stable and widespread of these being switchgrass (Panicum virgatum). Switchgrass grows to an average height of 4 to 6 feet, is reliant only on weather once established, and will produce for 15 to 20 years in an established stand which is naturally resistant to weeds and helps prevent erosion while maintaining moisture of the ground soil. The root structure of these native plants extends to 5 feet below the surface, helping soil improve where it is grown.

Other than grazing and wild life habitat, what can we use switchgrass for?

If we are serious about alternative energy sources, a sustainable future and biofuels, switchgrass offers a much more viable option than corn ethanol. Here are some basics:

In 2008, an article in Scientific American, by writer David Biello, examines the potential switchgrass offers the biofuel industry. Highlighting the report, Biello writes “switchgrass ethanol delivers 540 percent of the energy used to produce it, compared with just roughly 25 percent more energy returned by corn-based ethanol according to the most optimistic studies.”

“Switchgrass will store enough carbon in its relatively permanent root system to offset 94 percent of the greenhouse gases emitted both to cultivate it and from the derived ethanol burned by vehicles. Of course, this estimate also relies on using the leftover parts of the grass itself as fuel for the biorefinery. 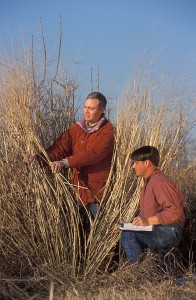 The use of native prairie grasses is meant to avoid some of the other risks associated with biofuels such as reduced diversity of local animal life and displacing food crops with fuel crops. It is an energy crop that can be grown on marginal land, such as the more than 35 million acres (14.2 million hectares) of marginal land that farmers are currently paid not to plant under the terms of USDA’s Conservation Reserve Program.

Forward-thinking companies like that of Colorado-based ZeaChem Inc. are building and beginning production of cellulosic ethanol. At their Port of Morrow facility in Boardman, one of the first operational cellulosic biorefineries in the world began producing in March of 2013, according to a report from Oregon Public Broadcasting.

Research is ongoing to develop switchgrass biomass as a feedstock for cellulosic ethanol production, fuel for direct combustion in ground and densified forms, composite materials, biodegradable plastics, and as a component in potting soil substrate. Even more promising research is discussed in an article by Josh Clark in “How Stuff Works”.

We expect a coming blowback from profit-driven seed companies, fertilizer manufacturers and others who will not reap their expected rewards for the promised boom in corn ethanol, now falling both in its cost efficiencies and sustainability for a long-term solution to our future energy needs.

Research should be able to easily mow down their theories.