At least 31 people are dead after a fire gutted a rubber slipper factory yesterday in Valenzuela, which is a suburb of Manila, the capital of the Philippines. The fire started when sparks from welding equipment used to repair a broken inner gate ignited flammable chemicals that were stored in the area. More than 30 people are still unaccounted for. 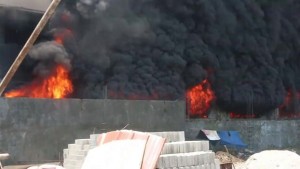 Fires like this are a common occurrence in the Philippines. Fire and safety regulations are lax to begin with, and many times they’re just ignored.

Of course, the Philippines are far from being alone in this attitude towards regulations; we only need to look at what happened in West, Texas two years ago or the ever-increasing incidences of exploding oil trains (coming to your town soon!) to debunk that idea. And, that’s the problem; we’re beginning to see a race to the bottom..

We see more and more examples every day of what happens when you allow corporations to write the policies and laws that affect how they do business. Everything becomes fair game if it means that the profit margin’s larger, and usually one of the first things to go is safety standards, or as they put it “overreaching regulations.”

If you’re even an occasional reader of ours, you know that we’ve run quite a few pieces on the Trans-Pacific Partnership (TPP). The TPP is policy written by and for the corporations, and the secrecy surrounding what’s actually in the agreement leads us as well as many others to believe that it won’t be good for us, the common people.

Back in March, the Philippine government announced that it would not take part in negotiations on the TPP under its current government. The country’s trade secretary said that “There is not enough time [for the Philippines] to join,” citing legal and constitutional complications, even though Philippine President Benigno Aquino had seemed inclined toward TPP membership last April.

If a country as underregulated as the Philippines sees “legal and constitutional complications” in joining the TPP, what should this tell the rest of us?