Governor Greg Abbott signs law designed to make null and void the hard-fought victory by the people of Denton, Texas who banned the hazardous drilling practice in their small town

By Jon Queally, staff writer for Common Dreams. Published May 19, 2015 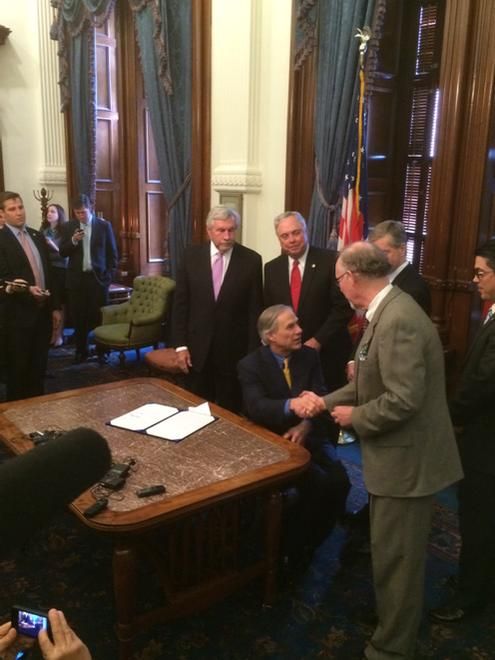 In what environmental campaigners and the people of the small town of Denton, Texas are calling a clear example of fossil fuel interests trumping the will of local residents, Republican Gov. Greg Abbott on Monday signed HB 40 into law thereby undermining a local ordinance, approved overwhelmingly by voters during last year’s election, which banned fracking in the community.

After receiving Abbott’s signature, the new law became effective immediately and now forbids any Texas town or city from passing local limits or restrictions on any gas or oil drilling operations deemed “commercially reasonable” by private developers and state regulators. Though it applies to all municipalities across the state, the effort to pass the measure was largely seen as a way to combat the stunning victory by the people of Denton who made international news in November by approving their local anti-fracking ordinance in a politically right-wing state dominated by the fossil fuel industry.

In response to the law’s passage on Monday, those who campaigned hardest for the Denton initiative called it a clear case of the fossil fuel industry using its political muscle to overpower the will of people in the name of profit.

Adam Briggle, president of the Denton Drilling Awareness Group and a leader in the Frack Free Denton effort, said Gov. Abbott has now proven that he believes “industry profits are more important” than the health, homes, and children of those who live in towns like Denton. “The letter of Texas law,” Briggle stated, “now says no city can ‘effectively prevent an oil and gas operation from occurring,’ no matter the threat to families’ health and safety or damage to private property.”

Members of the community-led group Frack Free Denton as they lobbied in the Texas capital against HB 40 early this year. The industry-backed measure was signed into law on Monday and effectively destroys the fracking moratorium overwhelmingly approved by Denton voters at the ballot box in November. (Photo: Frack Free Denton/Facebook)

Though the oil and gas industry filed a lawsuit against Denton following the passage of the anti-fracking ordinance last year, that challenge may now be unnecessary due to the new law.

Earthjustice attorney Deborah Goldberg, who is co-counsel  for the citizen groups and successfully defended the town of Dryden, NY, in a similar court case, suggested that HB 40 became necessary for the gas industry given the flimsy quality of its lawsuit against the Denton ordinance.

“The Texas courts have upheld a long tradition of local control, so the Governor and the Legislature took matters into their own hands,” Goldberg said. “Now, they have capitulated to the greedy but powerful oil and gas industry at the expense of their own constituents’ health, well-being, and property rights.”

The mayor of Denton, Chris Watts, who supported the fracking ban approved by local voters, acknowledged that HB 40 will likely “render Denton’s ordinance unenforceable,” but said the Texas legislature and Governor Abbott have approved a short-sighted and ill-conceived measure by turning HB 40 into state law. In an op-ed for the Denton Chronicle-Record, Watts explained:

HB 40 goes far beyond Denton’s fracturing ban and offers no solution to the multifaceted challenges of urban drilling. The bill is just a Band-Aid, and a poor one at that, because it does not address long-term, comprehensive regulations by cities of oil and gas development in urban areas.

So if cities cannot effectively regulate oil and gas operations within their city limits, who will? Some say the Texas Railroad Commission. Yet, I have seen no drafts from the commission of new rules addressing the issues and concerns of our residents. Are they being written? When will they come forward? What must happen before they are approved by the commission?

According to members of the legal team working on their behalf, the people of Denton are not ready to give up the fight just yet. “We have been proud to represent the proponents of Denton’s ban and we know they will regroup and fight back against this legislative over-reach,” said Goldberg.

And Dan Raichel, an attorney with NRDC and co-counsel for the citizen’s groups, was emphatic. “The people of Denton exercised their democratic right to keep a nasty industrial process out of their community–and now big oil and their friends in high places are steamrolling them, along with everyone else in Texas,” he said. “The interests of a powerful industry should never take priority over the health and safety of American families. Texans should be able to keep dangerous activities and chemicals away from their homes, schools, and hospitals–just as hundreds of other communities across the country have already done.”

For Mayor Chris Watts, meanwhile, he made it clear that neither he nor his community has any regrets about taking on the powerful fossil fuel industry and their legislative allies in Texas.

“It took a city like Denton and its residents to shine the spotlight on the inherent and unique problems associated with urban drilling,” he said. “The city of Denton can and will move forward,” he continued, and will not stop developing and enforcing “ordinances that protect the health and safety of our residents.”