With a year and a half to go before the 2016 elections, the presidential race is already front and center in the national media. With an unprecedented number of early candidates jockeying for the soundbyte or photo op that will give him or her a leg up on the competition, the rhetoric’s already flying fast and furious. One thing that you’ll almost always hear though is the candidate professing his or her patriotism.

Merriam-Webster defines patriotism as; “love for or devotion to one’s country.” While we’re pretty certain that all the announced candidates so far do love their country, the term sounds a little too tepid for some of the hyperventilating we’ve heard from some of the candidates. Could there be a better term for describing those candidates’ stated views? What about nationalism?

Merriam-Webster (again) defines nationalism as: “a sense of national consciousness exalting one nation above all others and placing primary emphasis on promotion of its culture and interests as opposed to those of other nations or supranational groups”  Is this a better fit for some of them? 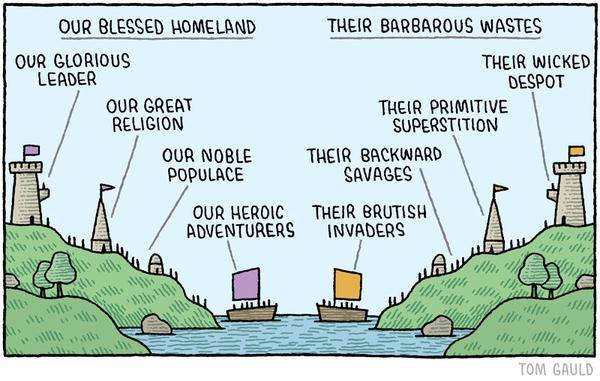 We’ve seen nationalistic stances being taken already by some of the candidates; you only need to look at their positions regarding the invasion of Iraq for a good example. They firmly believe that we are the “nation above all others” that Merriam-Webster refers to, instead of our actual position as one of many equals. But, why is this a problem?

It’s simple. Nationalism is the dark side of patriotism; an obsessive love if you will. With this viewpoint, our country is always on the side of good; the ends will always justify the means. Our achievements are unsurpassed. Our culture and way of life is supreme; it’s impossible to think that any group or country would seriously think their ways, religion or mores could possibly hold a candle to ours.

Needless to say, this isn’t quite a realistic view. Ranking America is a fascinating site for finding information about how the U.S. compares to other countries in a variety of categories. On the home page, a few stats will jump out at you; for example, the US rates second among fourteen developed countries in general ignorance about social statistics such as teen pregnancy, unemployment rates, and voting patterns. We’re 101st out of 162 as far as most peaceful goes. We’re 46th in freedom of the press. We’re 44th out of 51 as far as efficiency of health care goes. But, we’re #1 in number of people incarcerated and women’s Olympic gold figure skating medals, and #2 in drone strikes…

Can you be a patriot and not be a nationalist, then? Absolutely. To us, a patriot shows his or her love for the country by acknowledging where we’ve done wrong to ourselves or the international community, and pledges to make amends and fix the situation. He or she doesn’t make excuses for such things as the CIA’s forced interrogation scandal, or drone strikes killing innocent civilians. He or she realizes that our military adventurism around the globe is harming us more than helping us internationally, and is not afraid to say so. He or she will point out the flaws not as a spiteful gesture, but as a helpful observation. Sometimes, you need to be painfully honest with the one you love, after all…