‘Increasing the amount of toxic tar sands crude flowing into this region is not in keeping with a much needed transition to clean energy. Rejecting tar sands means fighting for clean water, clean energy, and a safer climate. There is simply no place for dirty oil in America’s future.’

Thousands of people marched through downtown St. Paul on Saturday making it clear they are willing to do whatever it takes to #StopTarSands and other dirty energy. (Photo: FossilFreeNU/Twitter/@DivestNorthwest)

With the marching crowd stretching “as far as the eye can see” in downtown St. Paul, Minnesota on Saturday, thousands of people from across the Midwest came together to protest the construction of new pipelines and other infrastructure projects which they say will deliver only harmful climate impacts for the planet and irreparable destruction to the region, not the jobs and energy security promised by big oil companies and their political backers.

Under the social media tag of #StopTarSands, Saturday’s Tar Sands Resistance March was sponsored by dozens of groups, including national and local environmental organizations, Indigenous communities, and various social justice groups who all agree it will take a unified front to fight back against the pipeline companies and fossil fuel interests pushing for expanded development of tar sands, shale oil and gas deposits, and other forms of extreme energy in the region.

In a statement, the coaltion behind the march explained that the climate justice movement in the U.S. and Canada has far more targets to fight than just the Keystone XL pipeline.

“It’s not just Keystone XL. Big Oil is trying to build and expand an enormous network of tar sands pipelines — some even bigger than Keystone XL — from Canada into the Great Lakes region. These tar sands pipelines, including the Alberta Clipper, along with crude oil trains and tankers, pose a growing risk to the Great Lakes, our rivers, our communities and our climate,” the statement said.

“The movement promoting clean energy prosperity in place of polluting fossil fuels is growing and being heard in every corner of the country,” said Terry Houle, co-chair of the Sierra Club’s Northstar Chapter, which helped organize the event. The march, said Houle, “picks up where last year’s Peoples’ Climate March in New York left off —  people from all walks of life are calling on the Administration to keep dirty fuels in the ground for the sake of clean air, clean water, and a stable climate.”

According to NRDC’s Anthony Swift, “Increasing the amount of toxic tar sands crude flowing into this region is not in keeping with a much needed transition to clean energy. Rejecting tar sands means fighting for clean water, clean energy, and a safer climate. There is simply no place for dirty oil in America’s future.”

Billed as the biggest anti–tar sands march and rally the Midwest has ever seen, Aaron Mair, board president of Sierra Club, trumpeted the coalition’s diversity and unwavering commitment as essential to its ultimate success against the pending Sandpiper pipeline and similar projects.

“With climate disruption, we face the greatest environmental challenge of all time,” Mair wrote in a blog post ahead of the march. “To meet it, we’ll need to change almost everything about how our country works. And to do that, we’re going to need everyone. It’s a big job, but it’s not impossible. We’re already gaining steam. We’re building a strong, authentic movement to confront climate disruption and to galvanize humanity’s response — and in so doing we can shift the world.”

And Tom Goldtooth, head of the Indigenous Environmental Network, said this week, “The frontline communities are strengthening the resistance. They’re concerned, and we are linking up the pipeline resisters in Canada, northern Minnesota, out east and more.”

To help explain why the Mideast region has become such an important battleground for the climate fight both in the U.S. and Canada, the organizers behind the Tar Sands Resistance March offered these reasons:

According to the Minneapolis Star-Tribune:

The rally takes place one day after Minnesota regulators endorsed the $2.6 billion Sandpiper pipeline that would carry North Dakota crude oil from the Bakken to Superior, Wis., where pipeline owner Enbridge Energy operates an oil terminal tied to other pipelines supplying refineries in the East and Midwest.

Enbridge, a Calgary-based energy company that operates the world’s longest petroleum pipeline network, owns six pipelines that cross Minnesota, where its operations date back to the 1950s.

Despite the drop in oil prices, Enbridge has said it is moving ahead with $44 billion in investments, including two other crude oil pipeline projects in Minnesota. Those projects — a line expansion and a line replacement — carry Canadian oil across Minnesota to Superior, including the heavy crude extracted from Alberta’s tar sands. 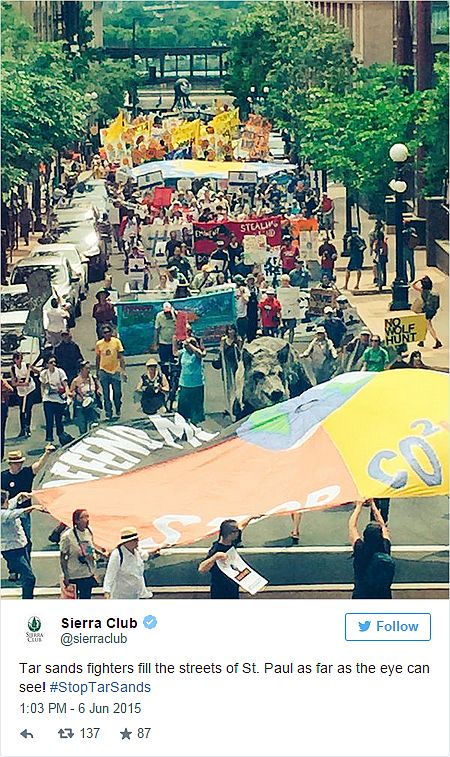 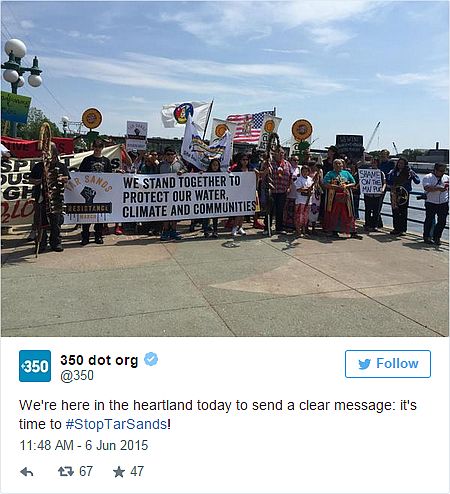 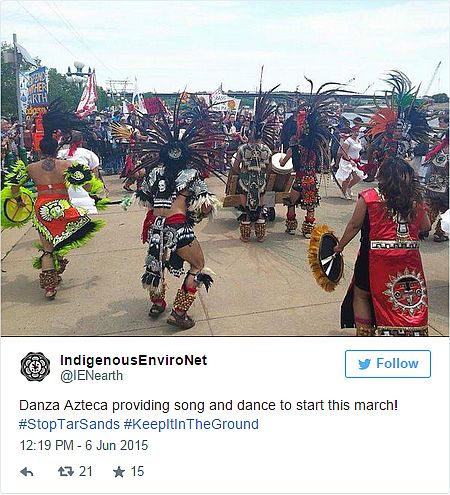 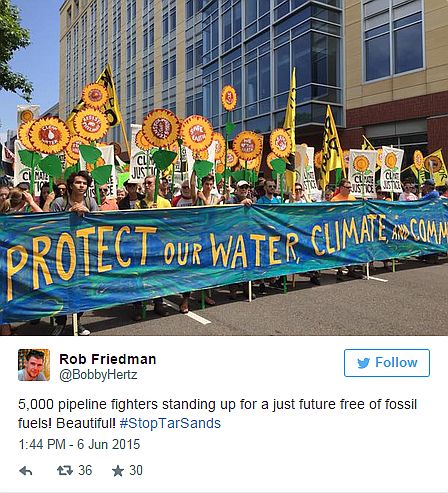 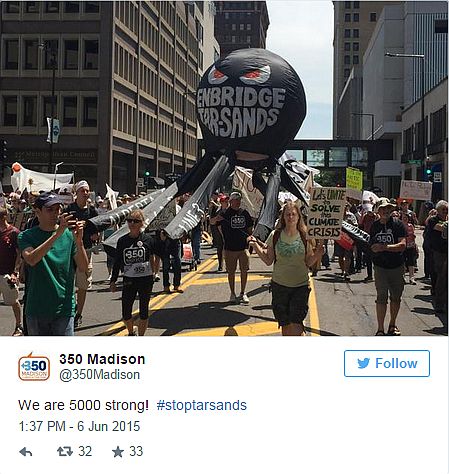 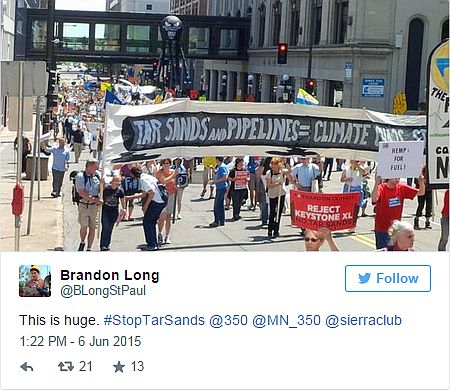 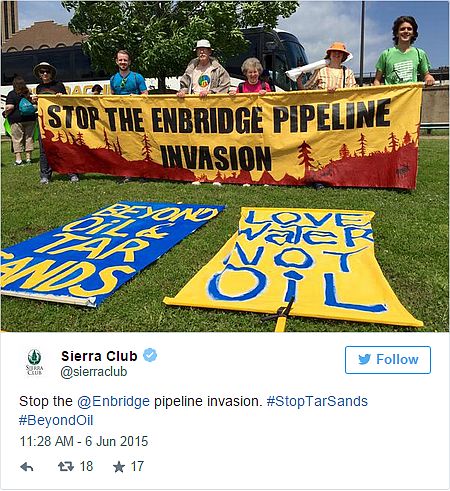