As states slash health services and pass laws outlawing reproductive rights, advocates say, “‘Pro-choice’ is gone and these are the choices that are left.’ 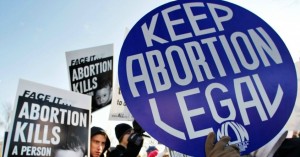 On Saturday, the 23-year-old Jones reportedly took the drug Cytotec, which is often used in the U.S. in non-surgical abortion procedures, to self-induce an abortion. Jones’ brother Rico Riggins told local news WALB that she went to the hospital after taking the drug because she was “in a world of hurt.” She miscarried the fetus while in the car en route to the hospital. Jones, who is the mother of a two-year-old, was subsequently arrested and taken to the Dougherty County Jail, where she is being held without bond.

Dougherty County District Attorney Greg Edwards told WALB that her case will likely go before a grand jury, because Georgia and federal laws will need to be “explored.”

Jones’ arrest comes roughly two months after an Indiana court sentenced Purvi Patel to 20 years in prison after she suffered a miscarriage. Patel’s case marked the first time a woman was successfully convicted and sentenced under a feticide law.

After news of Jones’ arrest broke on Tuesday, advocates condemned the charges. Reproductive rights group A is For on Twitter called the jailing “an egregious and unconstitutional violation.”

Others noted that prosecution of Patel, an Indian woman, and Jones, an African American, highlight the particular barriers placed against females of color under the GOP’s ongoing ‘war against women.’

“As states escalate efforts to restrict abortion and cut funding for family planning and other programs, women who miscarry or self-induce and fear complications are left in an untenable situation: seek medical care and face arrest or avoid treatment and risk injury or death,” wrote Salon reporter Katie McDonough.

Elizabeth Nash, senior state issues associate with the Guttmacher Institute, told McDonough that while a number of states have passed laws outright banning self-induced abortion, others have charged women “with various crimes — everything from practicing pharmacy without a license to fetal homicide.”

These laws, Nash explained, disproportionately impact those who don’t have access to proper health care. “We see that the women arrested tend to be low-income and tend to lack access to services. We’re seeing a collapse in access of abortion services and medical care in general. We’re seeing women who do need medical care might not seek it because they might be arrested. None of this serves a public health need.”

Robin Marty, columnist and author of the book Crow After Roe, wrote at Dame Magazine after news of Jones’ jailing:

We don’t know all of the circumstances that Jones faced when it came to her pregnancy. We don’t know how long she knew she was pregnant, if she tried to find care in a legal abortion clinic, if she had the money to travel or pay for an abortion, or many other details. What we do know is that she was from Albany, Georgia, an area of southern Georgia with no abortion clinics nearby. We know that the closest clinic in her state was an hour and a half away, and would not have been able to provide a termination after her first trimester. We know that almost every clinic in the state is located in or near Atlanta, almost three hours away from her home city. We know that an abortion will cost hundreds of dollars even in the first trimester, and that most insurances will not cover the medical procedure.

We also know that women who don’t have access to safe, legal abortion will do what they can to end a pregnancy anyway, if they are desperate enough. We know that pregnant people are trying to induce in secret. And as Jones’s situation reminds us, we know that while many will be successful, those who are not have two options—go to the hospital and potentially face a prison sentence, as well as lose the children you already have, or avoid the hospital, and maybe die.

“Pro-choice” is gone and these are the choices that are left.