“Members of Congress who have exchanged ‘yes’ votes for such IOUs have more often than not seen the promises broken,” says Public Citizen 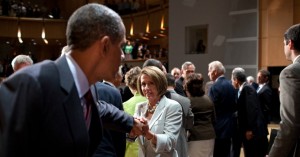 Public Citizen’s report is “a cautionary tale to members of Congress who are now contemplating the administration’s pledges of political cover, and offers of various goodies from the president and congressional leaders.” (Photo: The White House)

Lawmakers banking on “special favors” in exchange for their votes on controversial trade legislation risk “political peril,” according to a new report (pdf) from the watchdog group Public Citizen.

In the face of stubborn resistance from Democratic lawmakers, the Obama administration has “moved beyond trying to sell Fast Track on its merits,” Public Citizen says, “and is now offering rides on Air Force One, promises of infrastructure legislation, and pledges to help representatives survive the political backlash of a ‘yes’ vote on Fast Track.” What’s more, lawmakers are striving to include amendments to allegedly make pending trade legislation more palatable.

But with news outlets reporting that dozens of lawmakers are withholding their support for Fast Track legislation—which would allow President Barack Obama to send the 12-nation Trans-Pacific Partnership deal to Congress for an up-or-down vote—in order to “see what they can get” in terms of political favors and backing, Public Citizen’s analysis illuminates how such promises “consistently have been broken, exposing representatives to angry constituents and electoral losses.”

“Even in the rare case where a promise to ‘fix’ a controversial trade deal has been upheld, the acclaimed tweak has failed to offset or outlast the damage wrought on local communities,” said Ben Beachy, research director of Public Citizen’s Global Trade Watch. “Voters do not tend to remember boasts of finite safeguards or worker assistance funds, while mass layoffs, farm foreclosures and news reports on inequality provide fresh, ongoing reminders of how their member of Congress voted on Fast Track and Fast Tracked deals.”

Even now, Bill Moyers and Michael Winship point out, the pro-Fast Track faction is employing “strong-arm tactics” to pass Fast Track: “As the clock ticked past midnight into Wednesday, the House Republican leadership posted the legislation on line, hoping for a vote this Friday—’to spare supportive legislators,’ POLITICO reports, ‘the possibility of another weekend of attacks by trade foes back in their districts.’ Heaven forbid they should have to go home and hear a discouraging word from their constituents—the actual voters, as opposed to their big donors.”

They should take heed. One by one, Public Citizen’s report offers “examples of the track record of empty promises made to obtain difficult trade votes and resulting truncated political careers, providing a cautionary tale to members of Congress who are now contemplating the administration’s pledges of political cover, and offers of various goodies from the president and congressional leaders.”

Of the 92 specific promises included in the report, only 17 percent were kept, according to the organization.

For example: In 1993, U.S. Rep. Alcee Hastings (D-Fla.), along with other Florida representatives, voted for NAFTA on the basis of the Clinton administration’s promises to protect Florida’s tomato growers from destabilizing surges in tomato imports from Mexico. But, Public Citizen points out, the Clinton administration did not honor its pledge—within two years of NAFTA, tomato imports multiplied, Florida’s tomato revenues dropped more than 40 percent, and the number of Florida tomato growers fell 60 percent.

“Indeed, a review of the last two decades of presidential promises made to extract trade votes facing passionate public opposition reveals that members of Congress who have exchanged ‘yes’ votes for such IOUs have more often than not seen the promises broken, leaving them exposed to voters’ anger over their vote against the opinion and interests of the majority,” reads the report. “In many cases, this exposure has contributed to subsequent electoral losses, costing members of Congress their jobs.”

The latest reporting suggests that a vote on Fast Track in the House will come on Friday. According to The Hill:

Despite Obama’s efforts, an overwhelming number of Democrats are expected to vote against his call for fast-track. But the White House has won 19 Democratic votes, according to a Whip List kept by The Hill.

A handful of other Democratic votes could also be in play for Obama, fast-track supporters such as Rep. Gerald Connolly (D-Va.) have said.

Republicans are seeking to win as many as 200 votes in their conference for fast-track. Thirty House Republicans are “no” or “leaning no” on the vote, according to The Hill’s Whip List.