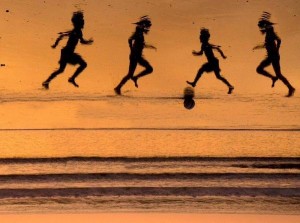 The Senator from Israel, Prime Minister Benjamin Netanyahu, has proclaimed the HRC report to be a waste of time. Israel is now releasing their own findings of their own investigation, and have decided after careful and thoughtful consideration, that the Gaza War campaign was a completely legal military exercise meant only for Israel to protect herself. The UN numbers are disputed, the total devastation is disregarded, and the report is labeled as objective.

Bibi’s response doesn’t come as a surprise to us. After all, we see the same self-investigation happening when the people who are supposed to be serving and protecting people are caught killing innocent unarmed civilians, and with the same results. Of course, this isn’t the only similarity between US and Israeli “law enforcement” (we use the term loosely); the tactics of said policemen on the ground are pretty much the same, as more and more of our state, county and local law enforcement agencies go to Israel to get training in the “handling” of civilians from the Israeli military.

Max Blumenthal wrote in a piece from 2011:

“The Israelification of America’s security apparatus, recently unleashed in full force against the Occupy Wall Street Movement, has taken place at every level of law enforcement, and in areas that have yet to be exposed. The phenomenon has been documented in bits and pieces, through occasional news reports that typically highlight Israel’s national security prowess without examining the problematic nature of working with a country accused of grave human rights abuses…

Having been schooled in Israeli tactics perfected during a 63 year experience of controlling, dispossessing, and occupying an indigenous population, local police forces have adapted them to monitor Muslim and immigrant neighborhoods in US cities. Meanwhile, former Israeli military officers have been hired to spearhead security operations at American airports and suburban shopping malls, leading to a wave of disturbing incidents of racial profiling, intimidation, and FBI interrogations of innocent, unsuspecting people.”

Who pays for this training? The same Israeli lobby that, through private donors such as AIPAC and Sheldon Adelson, spend millions of dollars each year on influencing our foreign policy in regards to Israel. The same people who ensured that Bibi would get a warm welcome from Congress when he came to Washington right before the Israeli elections to give a speech which ostensibly presented a reasonable argument for derailing the Iranian treaty negotiations, but was in actuality a recycled version of the same speech he’s been giving for years (without the bomb graphic this time, though) in a blatant attempt to shore up his lagging poll numbers at home.

It is our view that this action from the HRC in the assessment of the Gaza War actually will produce more awareness and unofficial condemnation of Israel’s actions during July and August of last year. With this being said, the acceptance of Palestine as a member to the International Criminal Court (ICC) does not grant them immediate prosecution of Israel, and actually results in a very complex structure that could takes years if any resolution is ever found at all.

In an article last April, Andrew Novak explores the topic and points out, “But the ICC is simultaneously weak, even fragile. It has no police force of its own. It cannot arrest suspects, gather evidence, or enforce its own judgments without at least some state cooperation. This lack of cooperation has led to the collapse of prosecutions against Sudanese President Omar al-Bashir for the Darfur genocide and against Kenyan President Uhuru Kenyatta for the 2007 election violence.”

While the story of David and Goliath has long been heralded as one of the most inspirational stories widely known, it is most interesting to watch Israel transform herself into the embodiment of the symbolic meaning of Goliath, while they have reduced their target, the Palestinians, to what the world today recognizes as the true David in this story. Four teenage boys do not look like Goliath. The olive trees bulldozed by the Israeli government certainly were not.

Occupy World Writes questions the policy that allows tax dollars from US citizens to be used to train police into militarized units on foreign soil by those who are accused of war crimes for their policing actions. We want to know when we get to be heard in our objections, rather than those who are currently bank-rolling the lobbyists in Washington to support actions that we march in our own streets to object to.

Or, are we to believe the Yiddish line “Trust me…” while we know the colloquial definition of the term?