In case you haven’t noticed, the 2016 presidential race is well underway. Currently, there are 455 people who have filed a Statement of Candidacy (FEC Form 2) with the FEC to register as a 2016 presidential candidate.

Of course, media coverage is essential to having a successful campaign, so the vast majority of these hopefuls will slip beneath the radar of the American public to become a footnote in history. However, there’s more candidates getting media coverage than is usual, due to the number of Fox News regulars who are running on the Republican side.

On the Democrat side, it was assumed by the media that Hillary Clinton would run virtually unopposed by anybody in her party. There was an effort to draft Elizabeth Warren, but Warren herself put an end to that, stating on numerous occasions that she would not run. Which brings us to the surprise of this election season so far; the rise of Bernie Sanders as a force in national politics.

At first look, you’d never expect Bernie to be a contender. He’s an unabashed socialist. He looks like your grumpy old uncle, and really doesn’t have any charisma. Yet, he’s been drawing huge crowds wherever he goes.

The national media is doing its best to downplay Bernie’s campaign. We’ve heard that he’s too old. We’ve heard that his policies are too far to the left for the moderates in the party; that he only appeals to the millennials; that his support is only among the white, college educated demographic, and that he doesn’t appeal to the older, blue collar moderate Democrat base. If that is the case, how would you explain this? 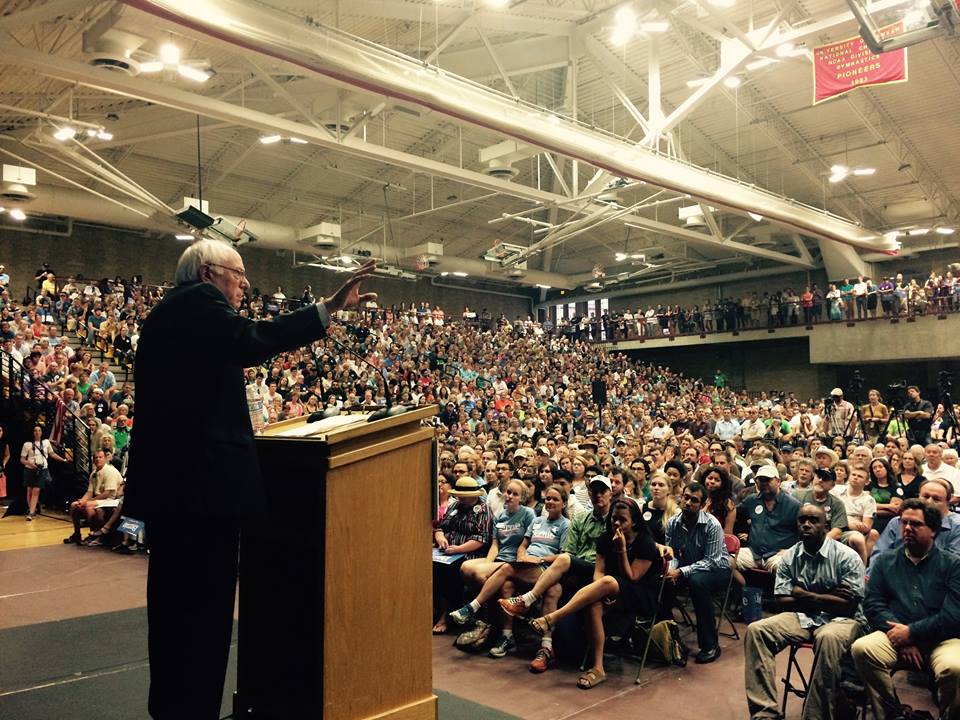 Bernie Sanders in Denver on June 20, 2015. Photo via Facebook

Now mind you, we aren’t endorsing Bernie here. We try to stay apolitical as much as possible when it comes to this site. What we are asking is why the media is downplaying what’s happening. And, it’s not just with Bernie; we see the same thing with the coverage of the Republican race. At this point, one would be lead to believe that corporate America has decided that it will be a race between Jeb Bush and Hillary Clinton, and they’ll do their best to skew the narrative to fit that viewpoint.

The election’s still over a year away. During that time, there’ll be many surprises, from unexpected leaders in the polls to the dirt dug up on the various candidates. What won’t be a surprise is how corporate America and the lapdog media will spin what the average, non-political American will see and hear about the candidates.