‘The fact that Netanyahu’s temper tantrum about the Iran deal could go towards an increase in aid is disturbing,’ said Naomi Dann of Jewish Voice for Peace 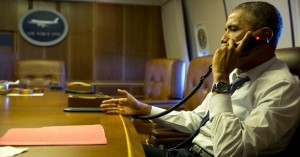 President Barack Obama offered Israel even more military aid this week as a consolation prize for the Iran deal, raising the concerns of human rights campaigners who oppose U.S. funding of atrocities against Palestinians.

Speaking with Israeli Prime Minister Benjamin Netanyahu on Tuesday, the same day the accord was reached, Obama said he is ready to hold “intensive discussions” about bolstering Israel’s military, according to unnamed administration officials cited by The New York Times.

However, Netanyahu—who has vigorously opposed diplomacy with Iran—rebuffed the gesture.

Obama indicated in an interview with the Times on Tuesday that Netanyahu is likely holding out to see if he can still sink the Iran deal. Netanyahu “perhaps thinks he can further influence the congressional debate, and I’m confident we’re going to be able to uphold this deal and implement it without Congress preventing that,” said the president.

Due to recently-passed legislation, the U.S. House and Senate will have 60 days to review Tuesday’s agreement between Iran and the United States, Russia, China, United Kingdom, France, Germany, and the European Union. If lawmakers were to vote against the deal, and amass the votes to override a presidential veto, Obama’s hands would be tied on sanctions relief and the deal would sink.

Tuesday was not the first time the U.S. has pledged to increase aid to Israel. Reuters reported in May that, after the $3 billion annual military aid package expires in 2017, payments could dramatically increase to as much as $4 billion.

Any increase in U.S. military aid to Israel is certain to be controversial. Human rights advocates have long opposed the role of the U.S. in arming, financing, and politically backing Israeli occupation, colonization, and war crimes—from Lebanon to Palestine. The Palestinian call for Boycott, Divestment, and Sanctions urges an immediate end to such payments.

Naomi Dann, media coordinator for right group Jewish Voice for Peace, told Common Dreams, “The fact that Netanyahu’s temper tantrum about the Iran deal could go towards an increase in aid is disturbing, especially as we know that U.S. aid is being used to kill civilians in Gaza and the West Bank.”