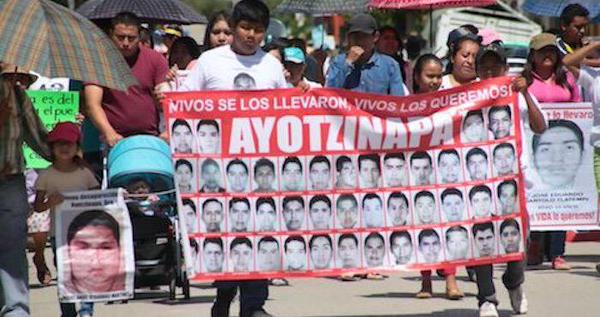 However, none of the remains found in those graves has been linked to the missing youths, “and authorities do not believe any will be,” the AP reports. The 43 leftist student-teachers were allegedly abducted by police in Iguala, Mexico on September 26, 2014 then handed over to a local drug gang that claims to have murdered them and burned the bodies. The students’ relatives largely reject this narrative, accusing the government of a cover-up.

Citing a report released by the Mexican attorney general’s office, AP journalist Maria Verza writes that of the 129 remains found in the graves between October and May, 112 were men, 20 women, and the rest are undetermined. The number of mass graves found by authorities as part of this investigation could be even higher because the information given to the AP only covers instances in which specialists became involved.

“More than 20,000 people are listed as missing across Mexico, and there are many ‘disappeared’ in Guerrero, a state that is a major opium producer and the battleground among several cartels warring over territory and drug smuggling routes,” Verza writes. “The government has said there is no evidence the 43 students were involved in the drug trade, but says they were mistaken for a rival gang.”

On Sunday, a few hundred people led by parents of the missing youths marched in Mexico City to call for justice and answers in the case. Demonstrations have been held on the 26th of each month since the incident.

According to Agence France-Presse, the families are angry at the handling of the case and refuse to believe their children are dead. “We demand the relaunching of the search and the reopening of the case, which this corrupt government has refused to do,” said Vidulfo Rosales, a lawyer for the families.

As Alexandra Délano and Melissa Ortiz Massó wrote earlier this month at Open Democracy: “The demand ‘vivos se los llevaron, vivos los queremos’ (‘alive they took them, alive we want them back’) is still ringing strong, even though government institutions would prefer to close the case. Ayotzinapa awoke us to the fact that this was not an isolated case, that corruption at every level has allowed it to happen (reflected online by the phrase #FueElEstado—’It was the State’), and that Mexicans have had it with the impunity and violence that reigns in their country.”

Just last week, the president of Mexico’s National Commission of Human Rights (CNDH) declared that failures and omissions have marked the government’s investigation into the students’ forced disappearance. CNDH president Luis Raul Gonzalez Perez also said the authorities have not “attended properly to the victims in the case and lacked in diligence in their investigation” and called for an end to “the collusion” between criminals and Mexican authorities that he said have marked the case.

But an investigative report published Sunday in the Mexican daily El Excelsior raised questions about the ability of the CNDH to effect change in a country wracked by violence and corruption.

Most of the commission’s budget is spent on employee’s salaries, not human rights investigations, the report found. That budget has reportedly increased by 62 percent over the last five years, with 70 percent allocated to wages and just 30 percent reserved for actual investigations.

“This situation explained why only around 1 percent of queries presented to the commission end in a concrete human rights recommendations being made,” wrote TeleSUR.