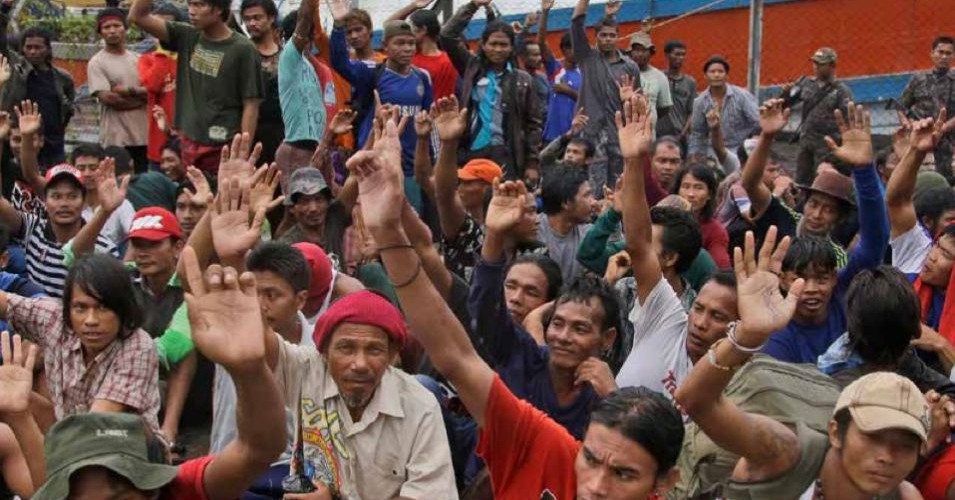 Fisherman raise their hands when asked who among them would like to go home. (Image via US State Department)

The U.S. State Department is being accused of playing politics with human rights after a damning new Reuters investigation published late Monday revealed that high level officials watered down the opinions of rights experts hired to evaluate nations’ human trafficking records seemingly to advance a number of the Obama administration’s key agenda items.

Exposing a “degree of intervention not previously known,” according to the investigation, there were 14 instances where senior American diplomats overruled the analyst opinions to inflate the record of “strategically important countries” for this year’s Trafficking in Persons Report, released last week.

Among those cases, Malaysia had its status upgraded from the lowest level “Tier 3” to the “Tier 2 Watchlist,” which is one rung down from “Tier 2,” despite analysts finding no improvement in the country’s trafficking record. Rights observers charge that this was a deliberate move to pave the way for the passage of the controversial Trans Pacific Partnership (TPP) trade agreement.

In June, Congress passed a provision barring the U.S. from entering into trade agreements with “Tier 3” countries. New Jersey Senator Bob Menendez (D), who had spearheaded that effort, issued a statement after the investigation was published, saying: “If true, the Reuters report further confirms what I, along with the human-rights community, have feared all along: The State Department’s trafficking report has been blatantly and intentionally politicized.”

Congressional sources and current and former State Department officials said experts in the [Office to Monitor and Combat Trafficking in Persons, or J/TIP] had recommended keeping Malaysia on Tier 3, highlighting a drop in human-trafficking convictions in the country to three last year from nine in 2013. They said, according to the sources, that some of Malaysia’s efforts to end forced labor amounted to promises rather than action.

The country has been cited for having a robust sex slavery industry as well as forced labor camps.

“The vultures circled,” Phil Robertson, deputy director of the Asia Division for Human Rights Watch, told Huffington Post. “What you are seeing is significant damage to the credibility of that report because of these political games played back in Washington.”

Other countries where the State Department issued such “inflated recommendations,” according to human rights analysts, included: China, India, Cuba, Mexico, and Uzbekistan.

Reuters notes that “while a Tier 3 ranking can trigger sanctions limiting access to aid…such action is frequently waived.” However, the real power of the trafficking report “is its ability to embarrass countries into action.”

Lawmakers, including Menendez, on the Senate Foreign Relations Committee are convening on Thursday to review the State Department report.