Boat tragedy in Libya, corpses of refugees in truck in Austria reminders of human cost of war, lack of humanitarian responses 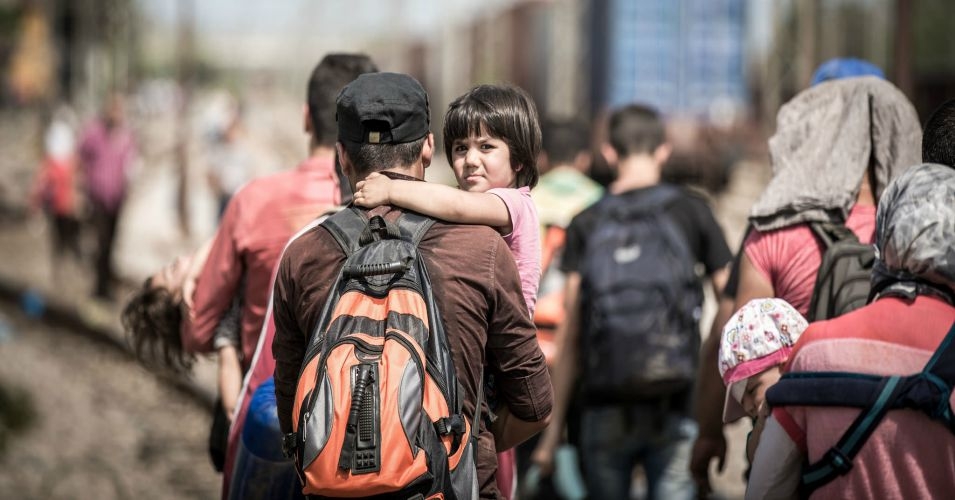 A Syrian father carries his daughter on 8 August 2015 to Gevgelija train station in the Former Yugoslav Republic of Macedonia where they will register with the authorities before proceeding north towards Serbia. (Photo: Stephen Ryan / IFRC via flickr)

It’s a crisis of record proportions that is being met with global “callous indifference” and failed, dehumanizing responses, human rights experts say.

The crisis, described as Europe’s worst refugee crisis since World War Two, involves hundreds of thousands of people fleeing conflict, many from Syria, Afghanistan, and Pakistan, trying to reach safety in Europe.

For some, the journey reaches a fatal end. As the Associated Press notes, the deaths come “by land and sea.”

Austrian officials said Friday that 71 likely Syrian refugees, including eight women and three children, died in the back of a truck that was abandoned in Hungary.

Katerina Kratzmann, International Organization for Migration (IOM) Austria’s Chief of Mission, descibed the scene: “When the police arrived, liquid of decay was already running out of the truck. The police think that the people died approximately between 36 and 48 hours before and that some might have been dead already when crossing the border from Hungary.”

And in Libya, up to 200 people are feared dead after a refugee-filled boat sank Thursday off the country’s coast. Libya, Reuters reports, “has turned into a transit route for migrants fleeing conflict and poverty to make it to Europe.”

The UN Refugee Agency says that the number of refugees crossing the Mediterranean this year has now exceeded 300,000, and the IOM said this week that nearly 2,400 people have died so far this year trying to reach Europe by sea.

For those that are able to reach Europe alive, no warm welcome awaits. The Toronto Star notes in an editorial this week:

The UNHCR reports that barely 140,000 refugees, about 1 per cent of those in its care, find new homes in any given year, mostly because the circle of welcoming countries is very small. That too speaks volumes about the world’s callous indifference. It also explains the desperation of the 340,000 asylum-seekers who have arrived at Europe’s none-too-welcoming gates so far this year.

Caritas and other human rights experts and have criticized Europe’s response—like Hungary’s border fence—to the massive influx of those fleeing conflict as neither democratic, productive, nor respectful of human dignity.

Underscoring the root causes of why people are undertaking these life-risking journeys, the UN Refugee agency said, “Many of the people arriving by sea in southern Europe, particularly in Greece, come from countries affected by violence and conflict, such as Syria, Iraq and Afghanistan; they are in need of international protection and they are often physically exhausted and psychologically traumatized.

“UNHCR appeals to all governments involved to provide comprehensive responses and act with humanity and in accordance with their international obligations.”

UN Special Rapporteur on the human rights of migrants François Crépeau described Europe’s current response as a delusional way of trying to stop the influx.

“Building fences, using tear gas and other forms of violence against migrants and asylum seekers, detention, withholding access to basics such as shelter, food or water and using threatening language or hateful speech will not stop migrants from coming or trying to come to Europe,” he said in a statement.

“We are talking about men, women, children and even babies, who have faced traumatic experiences,” Crépeau’s statement added. “Democratic borders are porous by nature.”

“The stench of the bodies of the men, women and children found in the truck in Austria impregnates all of us,” said Jorge Nuño Mayer, Secretary General of Caritas Europa.

“This cannot continue this way. More controls, security measures and armed forces presence will not stop this. Europe needs to act on a humanitarian approach basis in Europe and in the affected countries,” he stated.

IOM Director General William Lacy Swing adds, “Just as we have seen on the Mediterranean for these last three years, just as we have heard of similar tragedies in the Sahara, the specter of death now haunts the European continent. Something must be done, and soon, to make all migration legal and safe.”