Organized educators take stand for their profession, their students, and ‘people everywhere who are working for vital public schools and social justice.’ 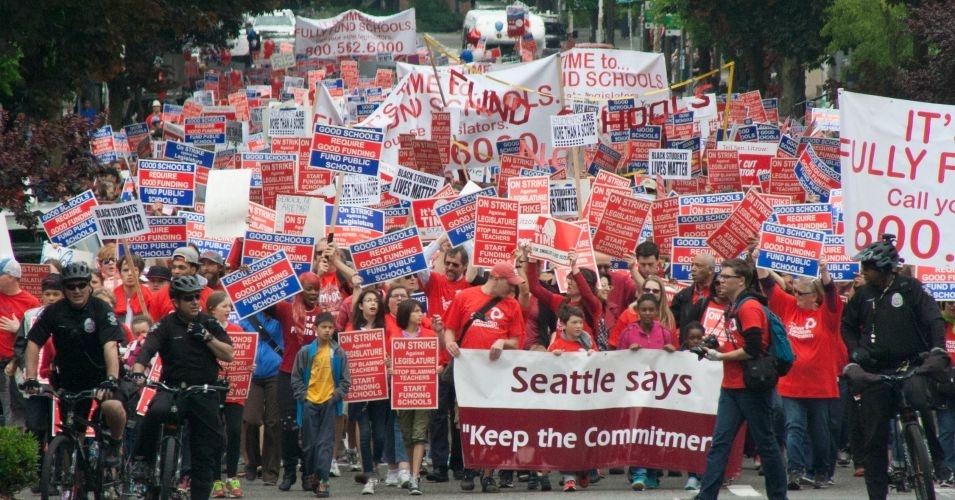 A crowd of red-clad teachers, parents and students marched through downtown Seattle on Tuesday. Organizers estimated at least 4,000 teachers were there. (Photo: Kyle Stokes KPLU)

The teachers remain on strike. The picket lines are united. And support among parents is strong.

That is the latest message from Seattle Education Association on Friday, as classes were cancelled for the third day amid the continuation of a strike demanding an unfreezing of wages, the end of unreasonable standardized testing for students, a more fair evaluation system for teachers, and new policies to increase equity among students.

“There’s nothing new to report,” said Michael Tamayo, one of the negotiators for the SEA, on Thursday afternoon after face-to-face meetings with school district representatives failed to materialize. “They know what our proposals are and we’re just waiting for some feedback and movement from them.”

As Common Dreams reported earlier this week, the position of the Seattle educators is notable because it goes beyond simple demands for higher wages and improved working conditions. The teachers have outlined “incredible list of educational reforms” seeking to address systemic problems—reforms that, according to Garfield High School history teacher Jesse Hagopian, would “truly improve the lives of children” throughout the city.

“Seattle educators have said ‘Enough!’,”  the letter reads. “You have bargained in good faith and now are striking for your members, for your students, for the broader community—and, really, for people everywhere who are working for vital public schools and social justice.”

With a community day of service planned by the teachers union for Friday, its members say they are eager to get back to the classroom but that the union’s fight remains focused on improving the lives of its members and all 53,000 students within the district.

“I’m ready to go on day one,” McClure Middle School teacher Mary Whisenhunt told the local Fox News 13 news channel. “I’m ready to go. I could teach tomorrow if we got a contract.”

However, she continued, “This is highly skilled work that we do that requires a lot of education. Many of us can’t afford to live in the city. I’m seriously considering moving out of the city. As a younger teacher coming with student loans from my master’s degree, it’s a struggle.”

Laura Lehni, a teacher in the district and member of the union’s bargaining team, told the Seattle Times she feels like there hasn’t been mutual trust throughout the talks, and that the union is still fighting to make teacher evaluations more consistent, to make changes to standardized testing, and to provide more training for school staff to address social equity.

“I think the district needs to buck up and pay the teachers what they deserve to be paid and give them the resources they need to educate our children,” said Lilith Lysistrata, a Seattle parent,  with NBC’s K5 News. “I have four kids in the Seattle school district and both my spouse and I work. This is tough on us, but I don’t want the teachers to fold.”

Seattle teachers and support staff walked off the job and onto picket lines on Wednesday morning following a breakdown in 11th-hour talks with the school district the night before.

“This has to do with putting more support into the schools when so much money has been going to consultants and managers,” said English teacher David Grosskopf, 44.

The walkout comes at a time of increased scrutiny of education spending in the state. The Washington state Supreme Court last month fined the state $100,000 for every day it failed to present a court-ordered plan for fully funding public schools.

And the Guardian, focusing on the community response and a broad show of support for the teachers, adds:

The strike has drawn more attention to economic disparities within the district as parents from more affluent areas who have aimed to reach all of the district’s 97 schools witness some of the challenges facing the lower-income schools. Darcey Pickard, a mother of two children at Louisa Boren STEM K-8, organized a group to support the underserved schools in west Seattle after learning one school didn’t have a PTA – something she didn’t even know was possible.

Many local restaurants donated meals to picketers. Will Lemke and Vanessa Resler, co-owners of the artisan popsicle company Six Strawberries, handed out free treats at three schools after a parent asked for their help. A Seattle public school graduate himself, Lemke remembers marching at the last strike with his parents in 1986 and says teachers do not ever strike on a whim.

“I hope that with the support of fellow Seattleites, local businesses and other allies, Seattle’s teachers will be back in the classroom as soon as possible with all of their demands met. If so, the real winners of this battle will be students – that’s who our public school teachers are truly fighting for.”