‘We cannot allow a situation to arise anew in which our young people are sent off to war to kill and be killed.’ 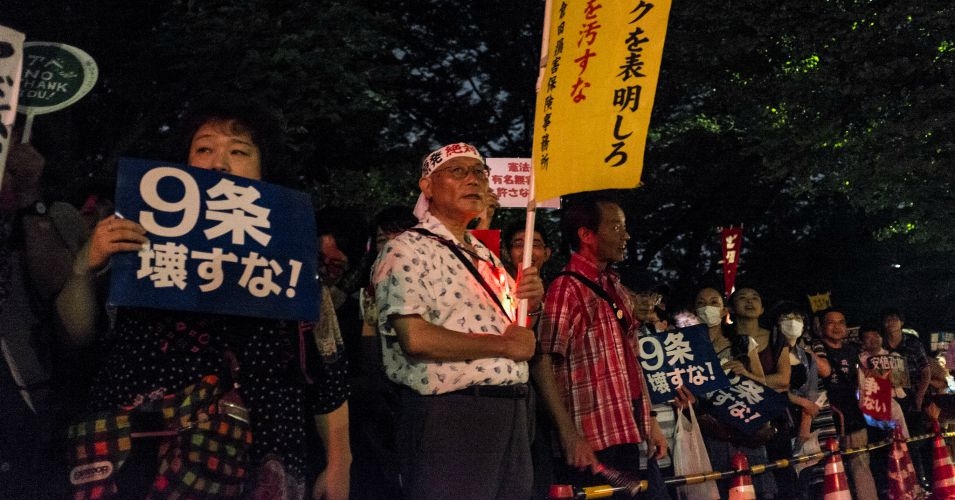 Protesters hold signs against the then-proposed changes to Article 9 of the Japanese constitution. (Photo: Christian c/flickr/cc)

Japan’s parliament passed into law on Saturday contentious bills would allow its troops to fight overseas for the first time since World War II.

goal was to find a way to remove some of the key legal restrictions that the war-renouncing Constitution imposes on the Self-Defense Forces during overseas missions in order to strengthen Japan’s all-important military alliance with the United States.

Protesters have filled the streets in opposition to the bills, with an estimated 10,000 protesters staging a rally outside parliament Saturday, chanting, “Protect the constitution.”

Attempts to stop the bills took place within parliament as well. As Common Dreams reported Thursday:

On Thursday night, upper house lawmakers in Tokyo opposed to the bills attempted to block a vote by physically preventing the committee chairperson from accessing his microphone. When ruling party politicians surrounded the chairperson, a scrum broke out, with punches thrown and some politicians even piling on top of the melee.

Opposition lawmakers led an unsuccessful effort to thwart the bills’ passage on Friday as well.  From the Guardian:

On Friday, five opposition parties, led by the Democratic party of Japan, submitted a series of unsuccessful no-confidence motions the prime minister, Shinzo Abe, and other senior Liberal Democrat party figures in an attempt to postpone a vote.

The LDP and its allies simply bided their time before using their majority in the upper house to pass the bills into law as thousands demonstrated outside. The more powerful lower house passed the bills in July amid a walkout by opposition MPs.

“The content, process and doctrine of the security bills … risk reversing the path we have walked for the past 70 years as a country of peace and democracy,” Reuters reports Yukio Edano, secretary-general of the opposition Democratic Party, as telling the parliament’s lower house ahead of the no-confidence vote against Abe.

The Association of Scholars Opposed to the Security-related Bills issued a statement in “resolute opposition” to the bills in June. It reads, in part:

Although Prime Minister Abe contends the use of military force would be limited, the legislation opens the way for unbridled use of force by the SDF and violates the principle of exclusively self-defense. Anywhere the SDF uses military force will automatically become a combat zone. As such, the bills are in clear violation of Article 9 paragraph 1’s prohibition against the use of force in combat. For over 60 years, successive administrations have understood that the exercise of collective self-defense violates the Constitution, yet the Abe administration seeks to overturn this and pave the way for Japan’s SDF to take part in American wars of aggression. Should this legislation pass, there is a very real danger that Japan could become a party to hostilities and the SDF an army of aggression in violation of international law.

We bear a special historical burden in that universities collaborated with Japan’s war of aggression and sent numerous students off to battle. Profoundly repentant of this history, we have adopted Article 9 as our own, have engaged in research and education as the bedrock for world peace, and have worked so as to never again be visited by the horrors of war. We cannot allow a situation to arise anew in which our young people are sent off to war to kill and be killed.