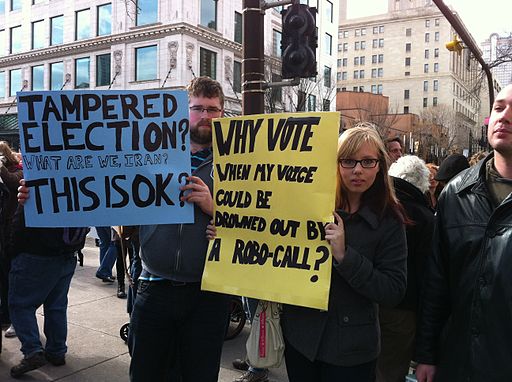 The agency that oversees elections in Canada issued a warning to its staff last year to keep a lookout for U.S.-style tricks aimed at suppressing the vote in the national elections that are slated for October 19, The Canadian Press revealed on Monday.

In May 2014, the agency Elections Canada delivered the presentation “An Introduction to Emerging Trends and Threats in Electoral Operations”—which was later obtained by The Canadian Press through an Access to Information Act request.

“We need look no further than the United States to find a vast overview of contemporary voter suppression and surveillance practices,” the presentation notes reportedly state, citing 17 cases in 15 American states between 2004 through 2012.

Such U.S. acts include the prevention of suspected “non-supporters” from voting through “scare tactics, misinformation or systemic challenging of registrations,” as well as by contesting eligibility or identification and employing outright intimidation at the polls, the presentation states.

The agency cited specific examples in which such tactics were levied against Spanish speaking and black voters in the U.S., according to The Canadian Press. “They often harass voters in predominantly minority voting districts, create anxiety and agitate voters,” the presentation notes continue.

Canada is no stranger to such techniques. Conservative Tory party staff member Michael Sona was convicted of voter suppression for using robocalls in 2011 to prevent suspected non-conservatives from casting their votes by giving them false information about their polling stations.

But Dylan Penner, democracy organizer with Council of Canadians, told Common Dreams that Sona’s conviction is part of a much larger story.

“What we saw in 2011 was a widespread campaign of voter suppression, and we’ve seen in rulings from the federal court that its purpose was to deter people who were not likely to vote conservative from casting their votes, and the likely source was the conservative party database,” said Penner. “The ringleaders of the voter suppression campaign are still at large despite many calls on the commissioners of Canada elections to reopen the investigation.”

But the scandals do not stop there. In response to the outcry over the 2011 election fraud scandal, the conservative government implemented the Fair Elections Act in 2014, which Penner refers to as the “Unfair Elections Act” because it “makes it easier for perpetrators of elections fraud to get away with it and compounds the problem by making it more difficult for many people to vote.”

“We are entering a new era of voter suppression in Canada,” Penner continued. “We have seen through the ‘Unfair Elections Act’ that marginalized and racialized communities—and people with disabilities, Indigenous people, and homeless people—are disproportionately impacted by voter suppression.”

Polling suggests distrust runs deep. A survey released late last year found that nearly 70 percent of people in Canada are worried that political parties will try to “manipulate the outcome of future elections through illegal activities.”