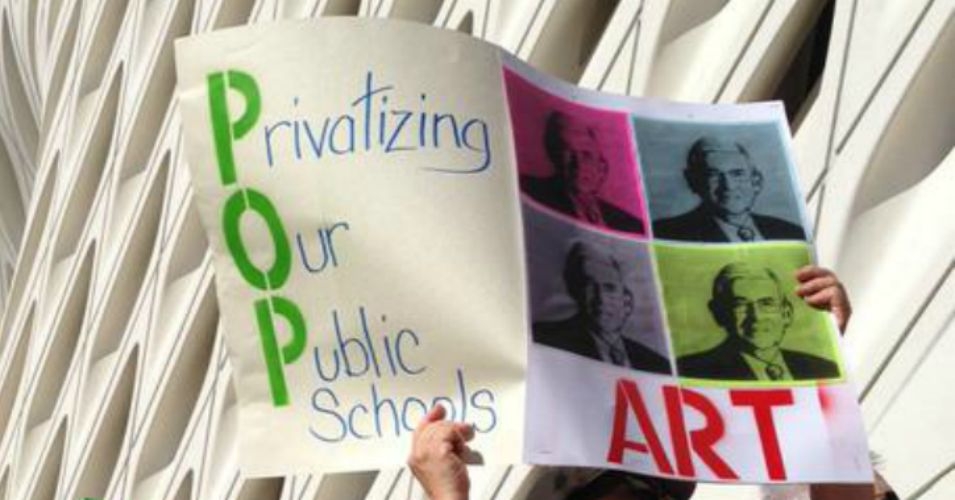 A sign at Sunday’s protest outside the new Broad Museum in Los Angeles. (Photo: Joel Rubin/Twitter)

A California billionaire is enlisting other wealthy backers in a $490 million scheme to place half of the students in the Los Angeles Unified School District into charter schools over the next eight years—a plan at least one critic says would “do away with democratically controlled, publicly accountable education in LA.”

“Los Angeles is uniquely positioned to create the largest, highest-performing charter sector in the nation,” the executive summary reads. “Such an exemplar would serve as a model for all large cities to follow.”

The document outlines the following three objectives that would serve to overthrow the current public system:

The initiative seeks to accomplish these ambitious goals between by 2023. As the LA Times reports:

Organizers of the effort have declined to publicly release details of the plan. But the memo lays out a strategy for moving forward, including how to raise money, recruit and train teachers, provide outreach to parents and navigate the political battle that will probably ensue.

The document cites numerous foundations and individuals who could be tapped for funding. In addition to the Broad Foundation, the list includes the Gates, Bloomberg, Annenberg and Hewlett foundations. Among the billionaires cited as potential donors are Stewart and Lynda Resnick, major producers of mandarin oranges, pistachios and pomegranates; Irvine Co. head Donald Bren; entertainment mogul David Geffen; and Tesla Motors’ Elon Musk.

According to teacher and education reform watchdog Peter Greene, writing at his Curmudgucation blog on Tuesday, the plan reads as “forty-four pages of How To Completely Circumvent the Public School System For Fun and Profit.”

“This is not just about educational quality (or lack thereof), or just about how to turn education into a cash cow for a few high rollers—this is about a ham-handed effort to circumvent democracy in a major American city,” Greene continued. “There’s nothing in this plan about listening to the parents or community—only about what is going to be done to them by men with power and money.”

Among the plan’s sharpest critics is LA Unified school board president Steve Zimmer, who characterized it to LA School Report as a destructive strategy that would ignore the needs of thousands of children “living in isolation, segregation and extreme poverty.”

“This is not an all-kids plan or an all-kids strategy,” he told the online news site. “It’s very explicitly a some-kids strategy, a strategy that some kids will have a better education at a publicly-funded school that assumes that other kids will be injured by that opportunity. It’s not appropriate in terms of what the conversation should be in Los Angeles. The conversation should be better public education options and quality public schools for all kids, not some kids.”

He added: “To submit a business plan that focuses on market share is tantamount to commodifying our children.”

And in an interview with the LA Times, Zimmer called Broad’s plan “an outline for a hostile takeover.”

The proposal has reportedly split the school board, with battle lines emerging at a meeting on Tuesday. “The concept amazes and angers me,” said board member Scott Schmerelson. “Far from being in the best interest of children, it is an insult to teaching and administrative professionals, an attack on democratic, transparent and inclusive public school governance and negates accountability to taxpayers.”

Meanwhile, an estimated 1,000 teachers, students, parents, and community members came out for the much-anticipated Broad museum opening in downtown Los Angeles Sunday, protesting what they see as Broad’s negative impact on education in the city.

“We’re concerned about the hypocrisy of building this great new arts museum in downtown, but working against schools having good arts programs across Los Angeles,” Caputo-Pearl said.

Education expert Diane Ravitch, writing Tuesday at her blog, put it more bluntly, saying Broad’s plan “would, of course, decimate the remaining public schools by draining them of students and resources.”

And the city would run a dual school-system, both supported by public funds. But only the charters would be free to reject students they don’t want, and they would have ample resources from their friends in philanthropy and hedge funds.

Who elected Eli Broad, a man who has said publicly that he knows nothing about education, to redesign the public schools that belong to the people, not to him?

UTLA’s Caputo-Pearl has challenged Broad to a public debate over the future of public education in Los Angeles; Broad has yet to respond.