“There is no development on a dead planet,” says 350.org executive director May Boeve 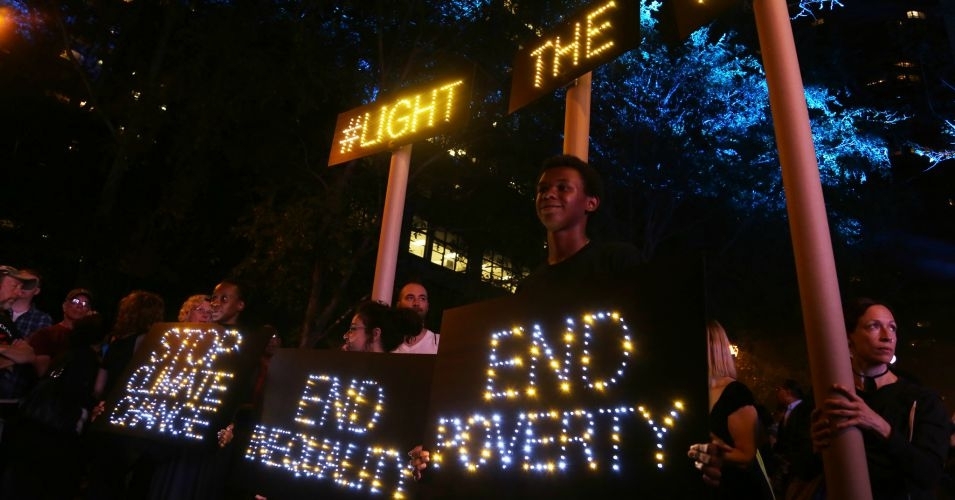 Campaigners outside of the UN building in New York on the eve of the Sustainable Development Goals Summit. (Photo: Marisol Grandon/Department for International Development via flickr/cc)

World leaders gathered at the United Nations on Friday and adopted a set of development goals—from eradicating poverty, to achieving gender equality, and taking urgent action on climate change—but they’ll only be achievable, according to anti-poverty organizations, if we bring an end to business-as-usual.

UN Secretary-General Ban Ki-moon described the objectives for 2030 known as Sustainable Development Goals (SDGs) as “bold yet achievable” and “the result of the most open and transparent consultation process in the history of the United Nations, in which individuals, community organizations, businesses, scientists, academics and other partners worked with Governments.” The goals’ stated focus is “leaving no one behind.”

Celebrating their adoption, Winnie Byanyima, Executive Director of Oxfam International, said the SDGs are “ambitious on paper—and they could be historic in their impact. They seek to go beyond band-aid solutions by setting out to eradicate—not just reduce —extreme poverty and hunger in every country.”

Yet, her statement continued, “To leave no one behind, we have to understand the many barriers people face, from economic and gender inequality to how the most vulnerable are the most affected by climate change. The goals are achievable, but it cannot be business as usual. Governments—rich and poor—must defy vested interests that seek to maintain the status quo at the expense of people and the planet.”

But is those “vested interests” being seen as partners, not problems, that sets up a roadblock to meeting the SDGs, argues Nick Dearden, director of Global Justice Now.

this wish-list comes with no historical background of how we got here, and no political strategy for how we get out. As such it relies on a mixture of more market and more technically competent governments. There’s no sign that the economic model itself is broken – just that it needs some tuning.

Take one obvious gap: trans-national corporations. They aren’t mentioned in the SDGs, yet the power of corporations is fundamental to the staggering levels of inequality which afflict the world, and are at the centre of an economic model quite prepared to burn the planet in its drive for ever more profit. It is impossible to realise the targets of the SDGs without tackling corporate power. […]

In short, power doesn’t exist in the SDGs. The chapter on inequality nowhere mentions that the problem of poverty is inseparable from the problem of super-wealth; that exploitation and the monopolisation of resources by the few is the cause of poverty.

CIDSE, an international alliance of Catholic development agencies, stated, “International leaders must heed the words of the Pope.”

“Human rights and the respect of the environment must be central to the implementation of the new Sustainable Development Goals agenda and the Climate agreement in Paris,” said Bernd Nilles, CIDSE Secretary General, in a statement issued Friday. “In this respect, the need for a fair and binding agreement on climate change at the UN Summit this December is essential to change course,” Nilles’ statement continues.

“There is no development on a dead planet,” stated 350.org Executive Director May Boeve.

“The Sustainable Development Goals will remain a list of empty promises if world leaders do not also commit to ambitious action to tackle the climate crisis,” she said. “The text of the goals recognizes as much, expressing serious concern about the gap between current pledges to reduce emissions and the actions that science and justice demand.

“Rich countries, who are responsible for the bulk of emissions, must move first and farthest, ending fossil fuel subsidies, fulfilling their pledge of $100 billion a year of climate finance, and helping mobilize trillions towards the clean energy revolution,” Boeve continued.

Yet the SDSs do represent “the world we want,” and “they must and can be realized,” said Amnesty International Secretary General Salil Shetty.

In his address to world leaders ahead of the adoption of the SDGs, he said, “Coherence and consistency is essential.”